The youngest Michelin chef in London

The 28-year-old Asimakis Chaniotis is the executive chef of Pied a Terre, one of the finest London-based restaurants with two Michelin stars, with his first star for his work there acquired in 2018. With this conquest, he became the youngest chef earning Michelin star in London.

The distinguished chef welcomes his customers with Greek olive oil, which he makes and packs himself, while perfectly combining French cuisine with Greek products. He uses the frumenty textures, the coolness of Cretan weeds, the juice of unspoiled grapes used by housewives in the island Greece, creating delicious dishes that remind something of Greece. 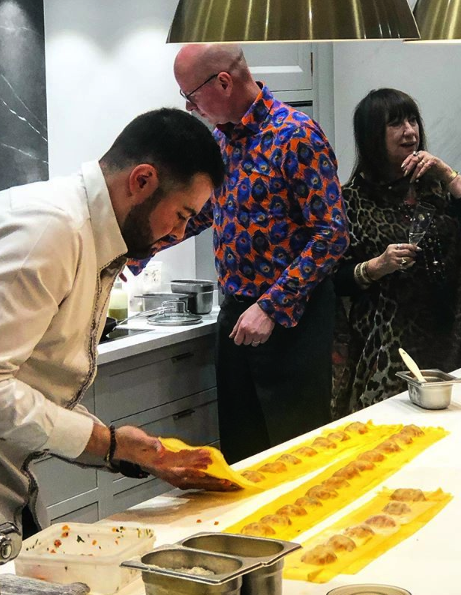 He was born in Athens, he originates from Kefalonia and grew up in Peristeri. He spent his childhood filled with summer holidays in Kefalonia, fishing and hunting, activities that taught him the love of fresh produce. From an early age, he was interested in street art (graffiti) and he was involved with it, while his favorite food since he was a child is the stewed snails that his mother always made when he returned from the summer camp and in special circumstances.

His father was a plumber, but he did not want to take over the business. His interest in gastronomy began to become a career dream at the age of 15 when he started cooking at home because he was interested in learning and creating. 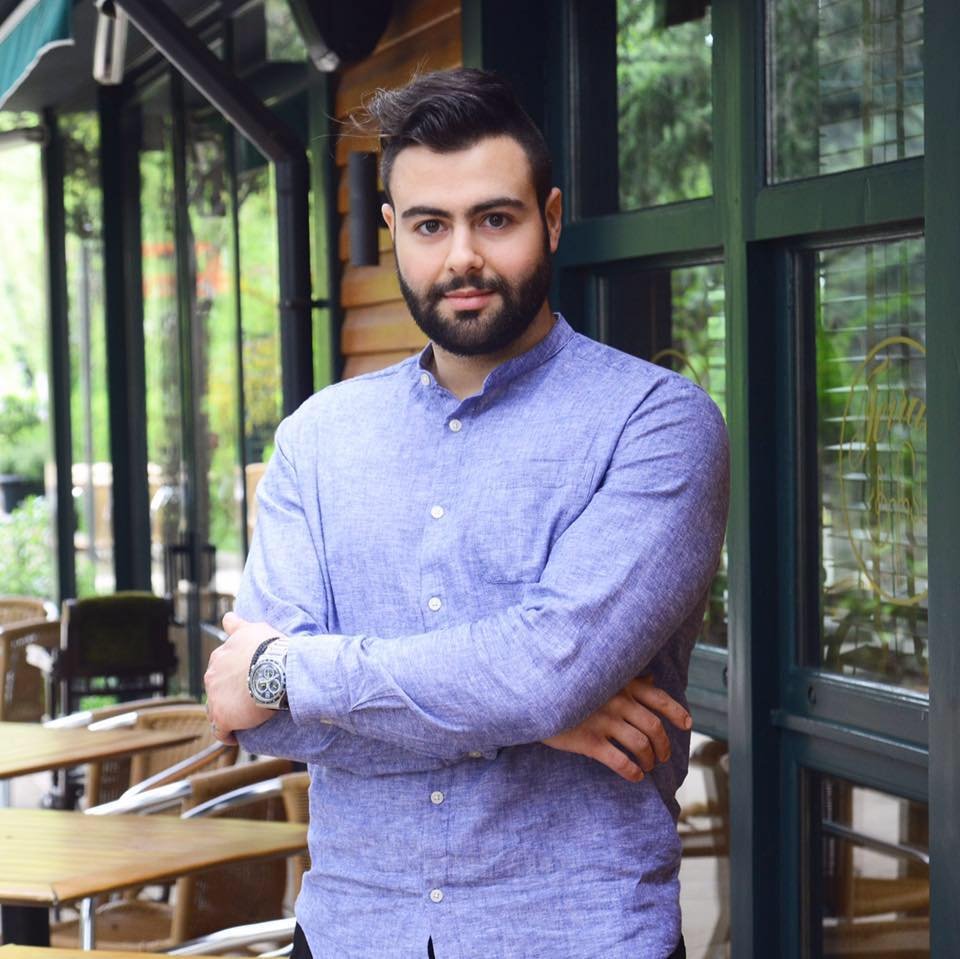 After studying cooking, the art of graffiti inspired him and helped him develop as a young assistant cook and chef in the kitchens he started working on. He spent three and a half years in one of Athens’ best restaurants, became sous chef at age 21 and then decided that he needed something different, that what he did was not fulfilling enough for him.

Being disappointed by the workplace in Greece, due to the lack of opportunities, he set sail for abroad looking for a position that would correspond to his talent and ambition. He went to London and worked in a friend’s restaurant for a few months, but that did not satisfy him. 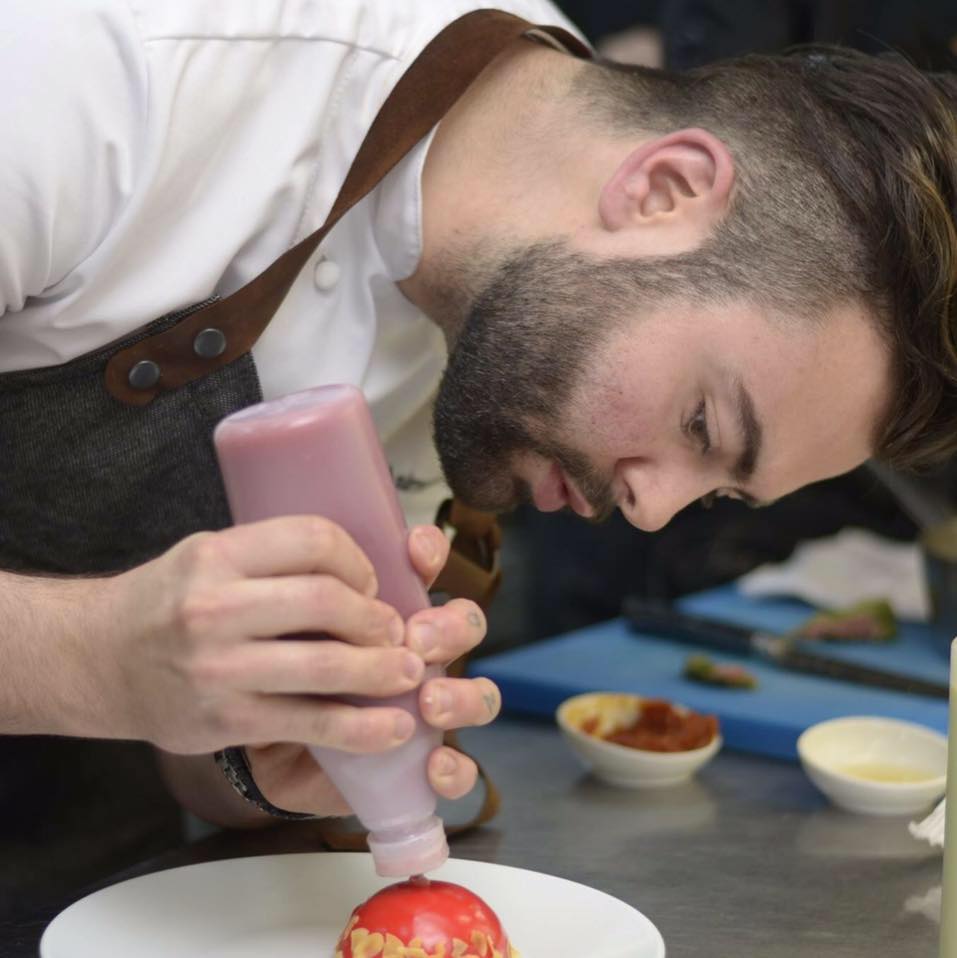 He worked in a variety of kitchens from Hotel chains to restaurants to British pubs and from fine dining to banquets and exhibition centers, and even a chef in a private yacht. He has been through the buffet, banquet, fine dining, room service, breakfast, a la carte, snack and finger foods. Nothing, however, made him so passionate about gastronomy as fine dining and French cuisine, the precision, the creativity, the artistry, all had him hooked.

So he sent his resume and Pied à Terre, one of the best restaurants in the city, was the first to invite him for a trial. After passing it, he immediately showed that he was not afraid of the hard work, while his creativity allowed him to propose amazing dishes that honored the Greek tradition. A year and a half later, he was a sous chef and worked with Marcus Eaves, a Michelin owner. 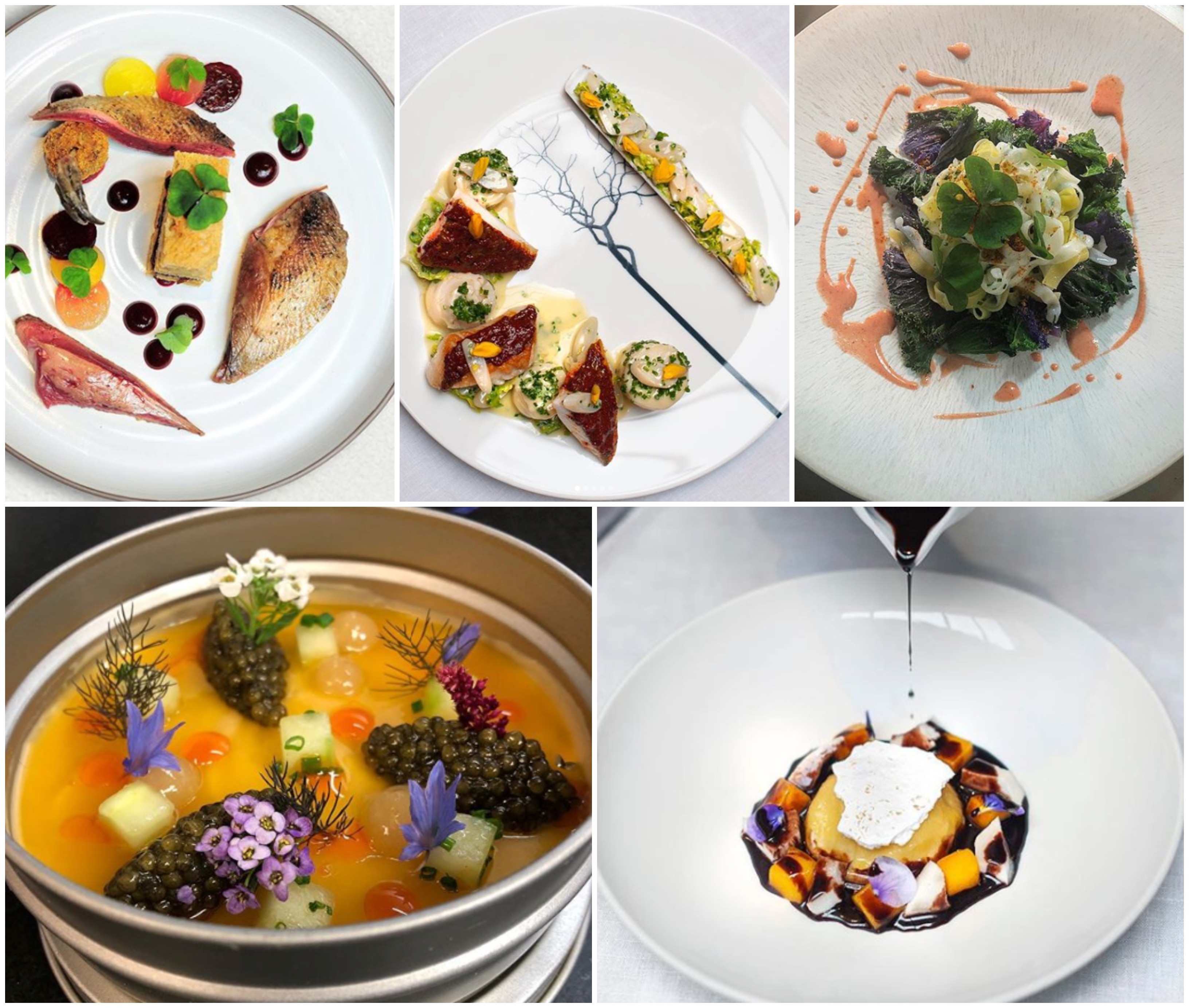 He worked with Andy McFadden (Michelin star) for a year and a half at Pied à Terre before he decided he wanted to leave because he couldn’t get any higher up the ladder and had already spent five years working at the restaurant. He went for a trial at Per Se in New York and got a chef job there but when he told David Moore, he offered him the opportunity to take over at L’Autre Pied. He was there for 8 months and then it was sold, so David approached him again and offered him the position of exec head chef at Pied à Terre. In 2018, he received the first Michelin star for his work in the restaurant and won the title of the youngest Michelin chef in London.

For him above all is his team and always says that without them he would have done nothing. He is very hard on the job, both with himself and with the team, and, according to him, that is why the bar remains high. “You will never see me crying when I work and I will not serve anything that I am not completely satisfied with,” admits the 28-year-old chef. “When we finish work though, we can drink brotherly until the morning.” The biggest difficulty in the kitchen, for him, is when he must let his associates move forward and find new ones. 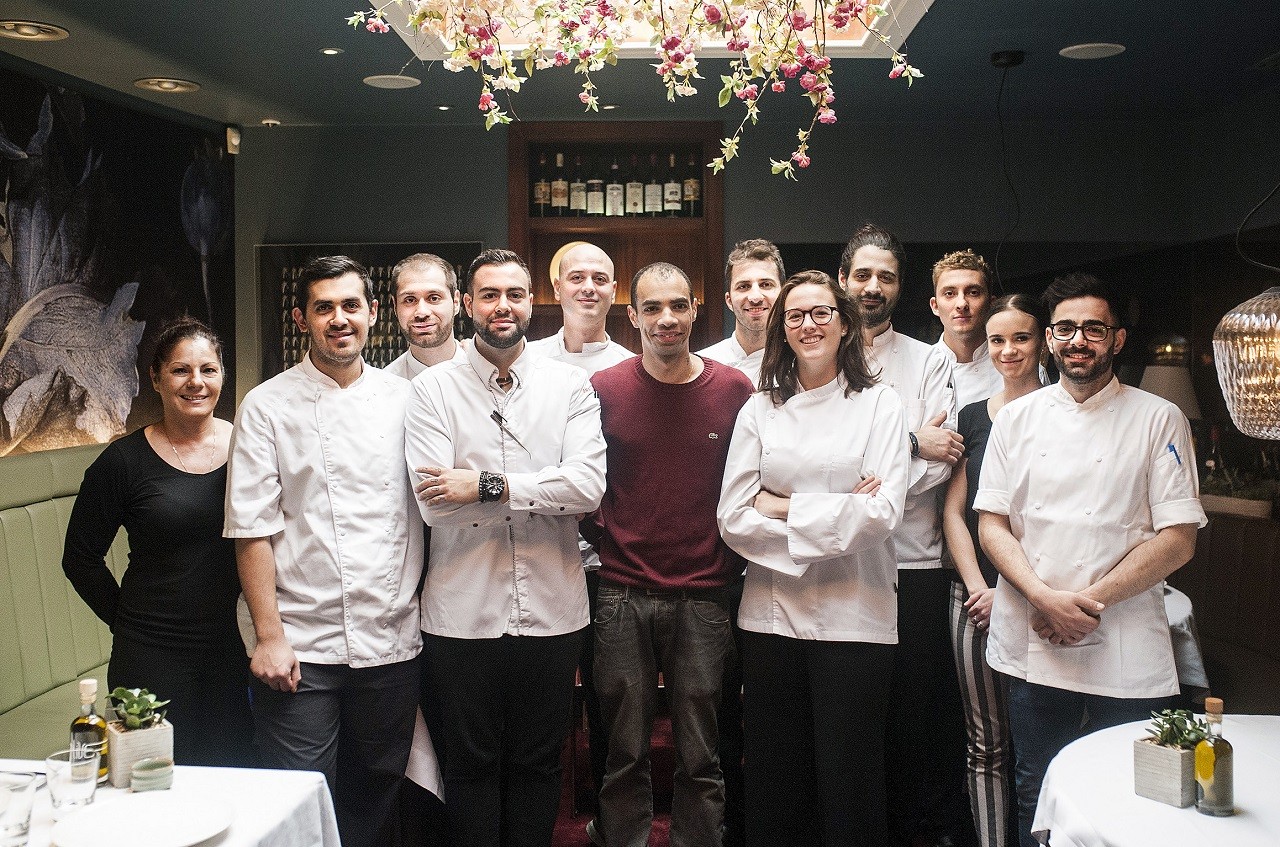 The first thing that Asimakis Chaniotis did when he became an executive chef was to forbid swearing in the kitchen. Influenced by his experience in Per Se, where there were 25 to 30 chefs and there was no shouting or swearing, there was no physical or mental abuse and he was so surprised having experienced all that in London. He wanted to make sure they have nice, positive energy in the kitchen. “There are nine of us in this kitchen and of course chefs will at some point get upset and they will swear because they’ve dropped something for example but that is not a problem.” What he has banned is swearing at people, he wants to be an example to his staff and doesn’t want anyone to feel intimidated by anyone else.

When asked about what it means for him to be the youngest Michelin star chef in London and whether he feels proud, he replies that he feels very proud, but he always tries with his team to become better and to evolve. “The responsibilities you have to do in order to succeed this are too many. From a lack of personal life, a lot of patience, incredibly long hours of work and lack of sleep – and even with very little earnings at the beginning. Of course, when I learned the good news, I definitely felt great joy. Firstly, I drank a glass of whiskey by myself and then I went to the kitchen and opened a bottle of champagne with my team. ” 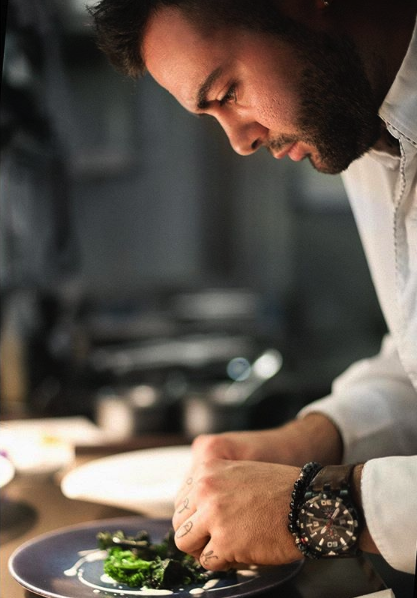 His desire, apart from the preservation of the star, is to remain humble and to continue the hard work, with the next goal being the second star, which, in order to come, needs continual hard work, development and maintenance of the standards. He says it will take time but he will put his soul in it.

He always wants perfection and finding the freshest and finest products is especially important to him, he wants to know where he can find them and how he can combine them. Along with learning new techniques and learning about wine, he has pushed himself to try to create an unforgettable experience for his clients. “This hunt for perfection and attention to detail, as well as the excitement and adrenaline I get while trying to raise standards in the kitchen, have made me the chef I am today,” he writes on his personal site. 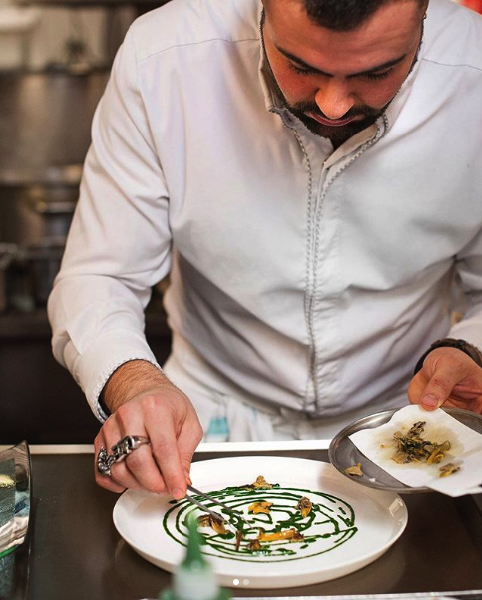 To the question of which chef he thinks has influenced him most in his career, he answered that he gets good things from all those with whom he works and definitely have chefs he admires, such as Thomas Keller. But he wouldn’t say his cooking is similar to anyone else’s. The first chef he worked with in Greece at Cape Sounio was a great influence on him, he’d worked in some fantastic restaurants around Europe. According to Chaniotis, he was the kind of chef who wasn’t aggressive and he would take the time to explain to him the recipe and how to do it. He gave him the first push to fall in love with cooking as a profession.

David Moore, owner and restaurateur of Pied à Terre, sees a new move to the Greek chef, which he has not seen for many years in the London restaurant. He believes that the energy, personality and showmanship of the Greek chef bring new touches to one of the longest permanent Michelin awarded restaurants in London while bonding the kitchen team and making the restaurant look more impressive and complete.