The mezzo-soprano with the folk heart

The ambassador of Greek culture and internationally renowned mezzo-soprano, Alexandra Gravas, has set on a glorious course abroad, performing concerts in major theaters of the world, presenting leading Greek composers and poets. What makes her voice so special is its inconceivable depth and lyricism.

She has the unique ability to make her thoughts a deeply sensuous experience for her listeners, as each composition is interpreted in an unprecedented way by a voice that changes effortlessly between the levels of musical expression. The impressively wide range of songs she performs includes arias and classic to traditional and modern songs, while as a spirit open to all kinds of music, she lends her distinctive voice to the most diverse genres. 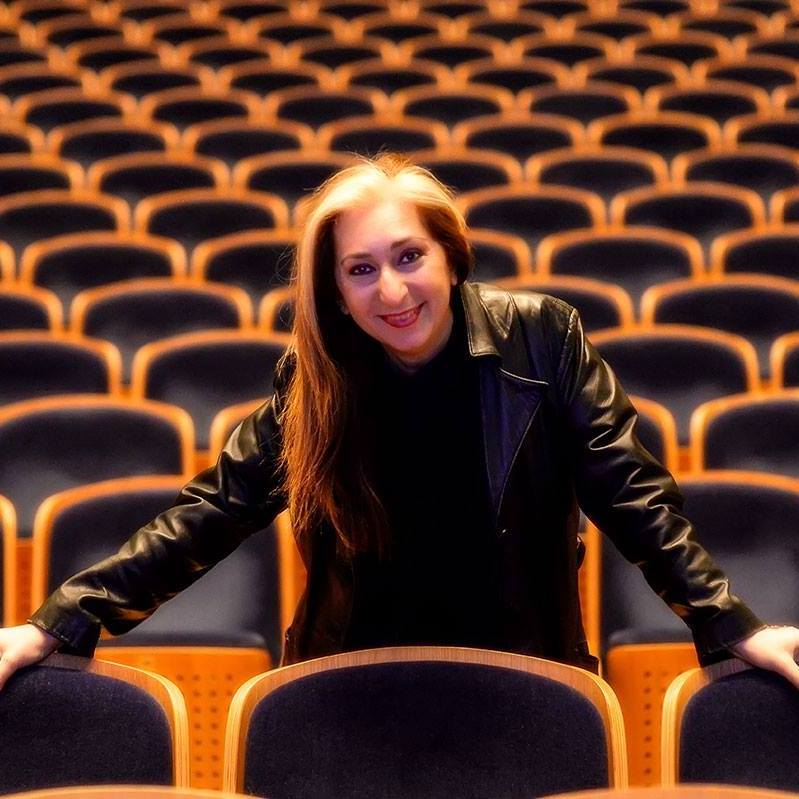 Alexandra Gravas was born in Offenbach, Germany, in 1978, grew up in Frankfurt with her brother Giorgos Gizzopoulos and is from Thessaloniki and Smyrna. When she lost her father at an early age, her mother, Stamatia Gravas, took over the responsibility and burdens of the family by striving to raise the two children.

The music at that time was an exquisite deal for the Gravas family, a kind of luxury that little Alexandra could enjoy mainly in the company of a friend who played piano. The girlfriends spent many hours together and very quickly it was realized that Alexandra had talent, the so-called “musical ear”. Her friend’s parents, after realizing this, decided to pay for a music teacher to teach her without her mother knowing it. When Mrs. Gravas found out, a day she picked her up from their house and saw her playing the piano, she was touched and very soon enrolled her to the conservatory where she learned the piano and later the flute.

She started singing at the Greek community’s celebrations in Germany and at the age of 11, she knew she would become a singer one day. However, at the age of 16, she experienced a problem with her voice and for a year and a half doctors could not find her condition. An auditor made the diagnosis shortly before she finished high school; voice paralysis that started with laryngitis. For one and a half years, she did not speak at all, she used a panel, a pen and body movements to communicate.

Alexandra got a degree in Musicology, Philosophy and German Literature at the University of Frankfurt. For her, the student years were very difficult, since many considered her deaf-mute and when asked what she was doing at music classes and she wrote down that she wanted to become a singer, they laughed at her.

When the time came and her doctor informed her that she could speak again, she had forgotten the way to and had to go to speech therapy to learn to talk again. Soon after, she found a teacher and started vocal lessons, paying them from the job she had taken in a theater wardrobe. Her teacher lived in London and she went to meet her in Brussels every two weeks. Two months later, she told her she found interest in her voice, encouraging her to pursue her dream and, a year later, get a suitcase of 5,000 and go to London. 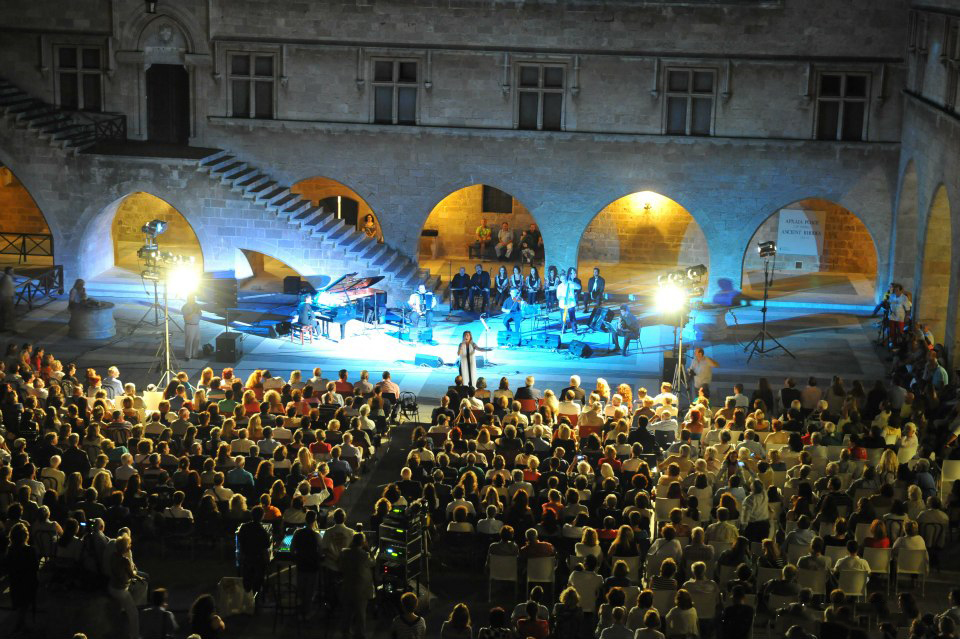 Having a need to work on a job that would not have a negative impact on her voice, she began giving German lessons to entrepreneurs, making quite a bit of money, and for three years her life was mostly countless hours of musical screening and hard work.

In 1998, Margaret Gibbs gave her her first business opportunity and she made her debut at London’s City Opera, where she stayed for three years. “When I first came out on stage, my legs trembled. Nonetheless, I felt relieved because I could sing and at the same time be justified because I touched my dream,” says the famous mezzo-soprano. At the same time, she worked at the English National Opera Studio along with Mary King and was tested in the opera repertoire, where she had felt people discouraging her or telling her she was not made for the opera. “I cried, but I never gave up.”

In 2000, she found composers who wrote music inspired by great Greek poets and composers, she communicated her vision and formed the ORAMA Ensemble Orchestra. Their first appearance was at the South Bank of London, and over the years they had such great success and recognition that they managed to make appearances even to Japan.

In 2004, Alexandra sang the German and British premieres of 16 songs by Nikos Skalkotas in Würzburg, Germany and London, while in the same year the recordings of “Bitter Tears” by Dimosthenis Stefanidis won the first prize of the Contemporary Music Competition 2004 TOMOS in the US.

Moreover, she was invited to give the final concert at Alte Oper Frankfurt / Germany, organized by the Hellenic Olympiad 2004 and the Hellenic Ministry of Culture, to mark the closing of the famed Frankfurt Book Fair.

In 2006, due to her anxiety and her acquaintance with her husband, Panagiotis Skordas, who made her want to live different things, she made the decision to leave London. She moved for long periods in Greece while traveling for concerts throughout the world. In 2006, she also made her first appearance in Greece at the concert of Mimis Plessas with Marios Fragoulis at the Olympic Stadium and was praised by the crowd. 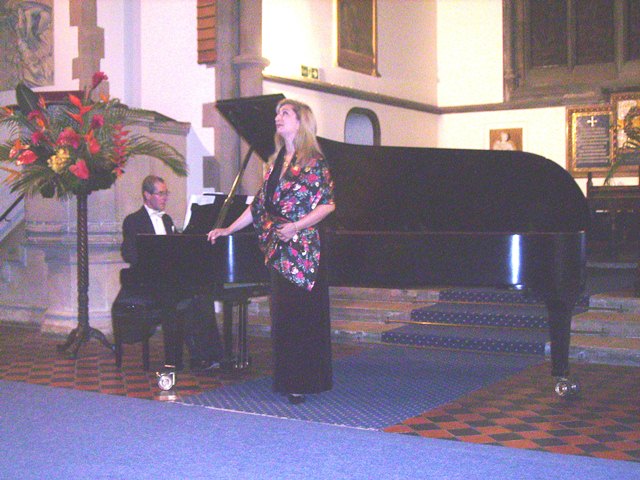 She then lived for the next three years with her husband in Vienna, continuing the concerts around the world, until Mikis Theodorakis chose her to perform the songs “Raven”, “Eros and Death” and “Les Eluard”. “Mikis Theodorakis is an extraordinary, giving and living myth. When I was a little girl, he was my idol and the first record I had heard was his. Working with him was an elusive dream and I was very moved,” she admitted in an interview. 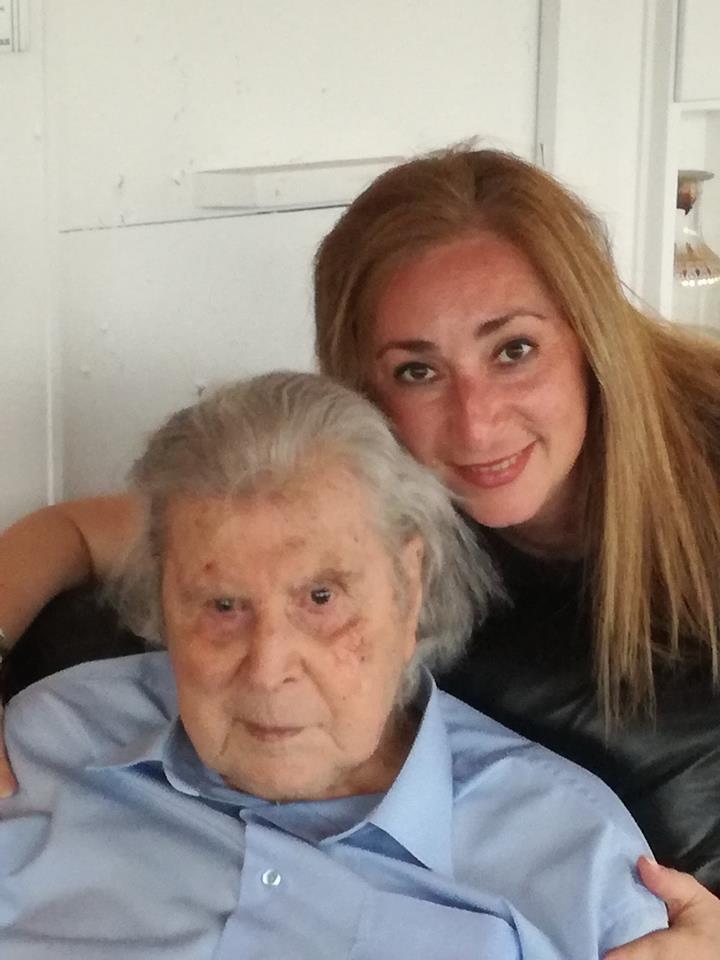 In Vienna, she got pregnant and stopped performing for a few years, as she said, the child changed her and made her see things differently; she did not miss the lights, the stage and the applause because the biggest light was in her home. “It is now difficult to combine trips with family, but with the help of my husband, my son, Stratos, must learn that Mom works and travels abroad for a better tomorrow. This is a life lesson.”

2012 brought her to the US to promote six acclaimed concerts with the new CP CAVAFY IN MUSIC program along with Dr. Pantelis Polyxonidis and Professor Vasilis Lambropoulos. Among other things, in November 2012, her collaboration with the “SOS Children’s Villages” culminated in a huge Benefiz Concert, which she organized very successfully in Germany. 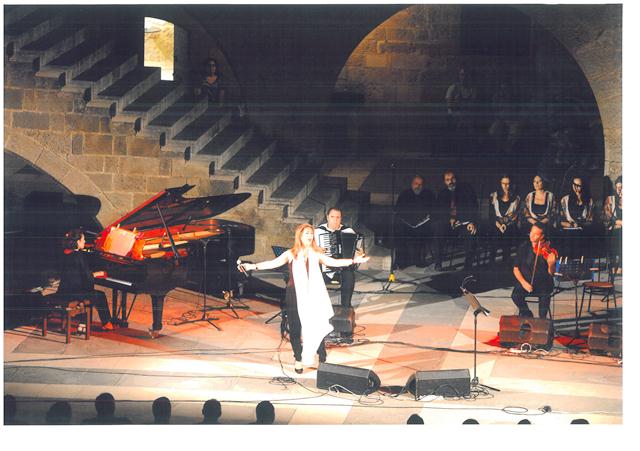 In 2013, she released the record “Songbook 1, On the Wings of Love” and her concerts traveled to Mexico, Argentina, Chile, London, Brussels, Israel, Germany, Vienna, Greece and Cyprus, while in 2014 she made a tour in Mexico and in 2015 she participated in the Olympou Festival.

In 2018, she released the record “Songbook 2 # Discoveries” by Mikis Theodorakis, performed concerts in Greece and abroad and collaborated with, among others, Loudovikos of Anogia (Georgios Dramountanis). 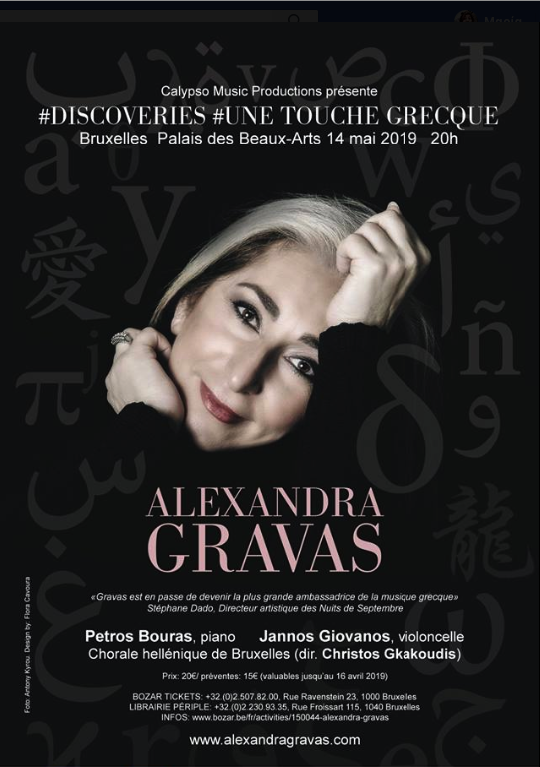 Today, Alexandra Gravas’ musical range includes an impressive range of songs. Her Greek roots played a very important role in her career, as the performance of works by modern Greek composers is an integral part of her repertoire, composed of works by German, French, Italian and English composers.

Alexandra Gravas often sings abroad for Greece, as she wants to show the country to the world, and her concerts often have a social and philanthropic background. Among other things, she has sung in Liège at the concert “12 Hours for Greece” (May 2015) and her concert in Frankfurt collected 25,000 euros, which were handed over to Greek Médecins Sans Frontières. 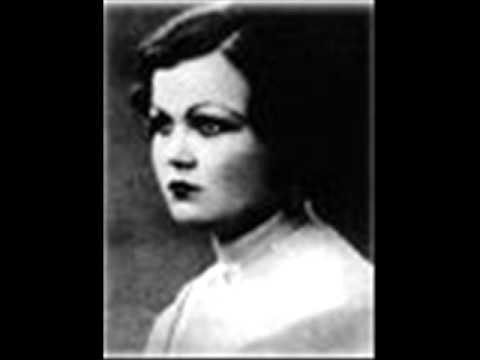