The Greek-Austrian chef who has won two Michelin stars

Awarded with 2 Michelin stars and with the title of Chef of the Year at the age of 39, Konstantin Filippou was born in Graz, Austria, by a Greek father and an Austrian mother and traveling by young age he needed little time to discover the driving forces that would shape his later professional career. As he says, his parents cook home-made Austrian and Greek recipes daily, creating a world of flavors that he loved and wanted to find a way to work on a professional level. Normally, the career in gastronomy has gradually evolved into a one-way street, something that never really regretted. “By making a general assessment of my course there is nothing that I would change. I am very happy about my decision, “he says.

For chef Konstantin Filippou the greatest virtues of a chef are patience, precision and passion. He also draws inspiration from what’s outside the kitchen. “That’s why I try to break. To rest, to travel, to see new things, to think”, as he says. “Kalamata is my father’s birthplace. That’s where everything started. I love her deeply – and the place, and his people. I only use organic salty oil, which my friends are producing. So, every day, grabbing it in my hands, I remember my origin”, he notes. If he had to fit his cooking philosophy in a few words, these would be “Exquisite products and focus on materials. Clean tastes and avoid the… noise”, he mentions. 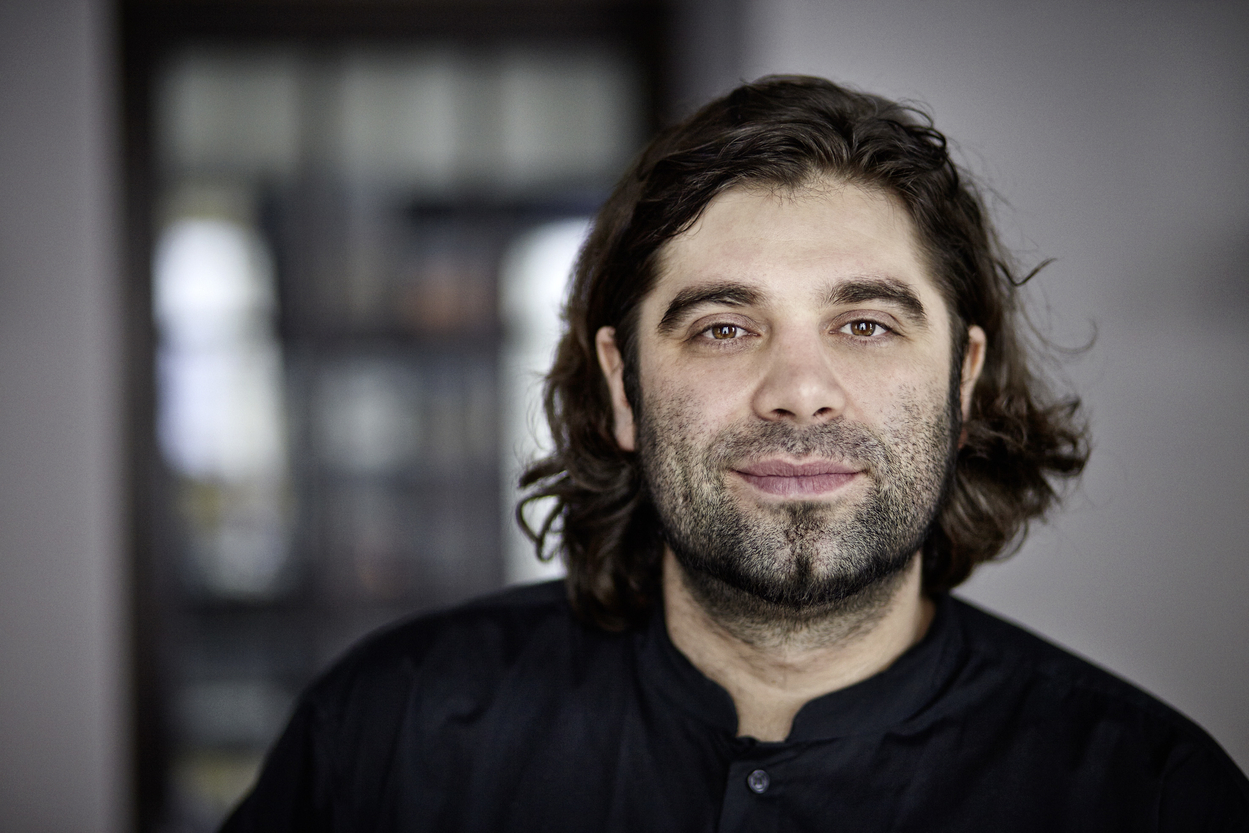 His journey begins at the “Unterhof” Hotel in Filzmo in Austria, where the executive chef took on the role of mentor teaching the then young Konstantin the basic principles of Austrian gastronomic culture. Then, in 1999, he took the next step and joined the Obauer restaurant team in Werfen, where he knows and assimilates the point of proper management of the raw material to ensure the viability of a business. The Viennese Diastroy restaurant “Steirereck”, however, was the station where it took over, among other things, the essential role of co-existence and perfect cooperation with a group in order to evolve and to cope with the standards of a demanding industry.

In the next few years, from 2003 onwards, he begins his teaching career outside of his native town in England, the Gordon Ramsay at Royal Hospital Road (3 stars) and Le Gavroche (2 stars) by Michel Rou. The rendering of the dishes, the presentation and the architecture of the London gastronomy scene were inspired and, of course, contributed significantly to the shaping of its gastronomic identity. From his journey he could not miss the triple Arzak in San Sebastián, Spain, where he met the Basque expressive cuisine in his most elegant version. “Perfection in their kitchen binds incredibly to the pleasant energy of this country”, he says. 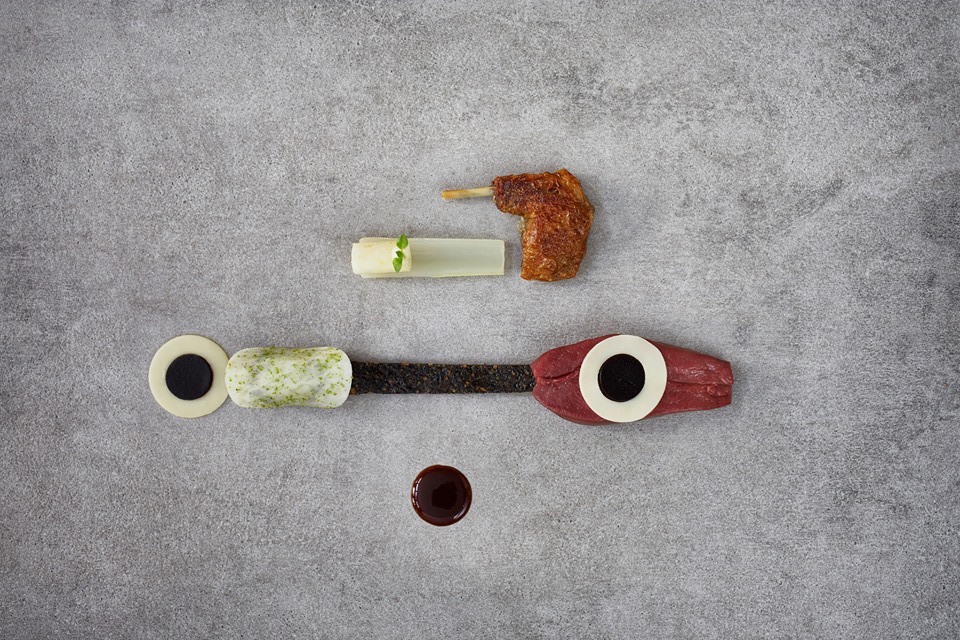 However, the main gastronomic influences of Konstantin have basically Austrian and Mediterranean roots and these have always been his starting point. “The two worlds I grew accentuated on the dishes I create. Together or in a creative duet. My inspiration is life itself. A nice conversation, a walk in the street or the forest, art, architecture. Everything is inspiration. My roots are in all my dishes. For example, the Greek Easter Soup, similar to the Austrian beuschel, is one of the dishes I like to cook very much”, he says.

Chef Konstantin Filippou continues saying that there are no moments that he feels less creative, because being creative is part of his life and personality. “I treat cooking as art and chefs as artists. Most chefs I know have artistic sensibilities and inspire. Often seeing a photograph of a dish I recognize and who made it. Most have a signature. And that’s art”, he says. 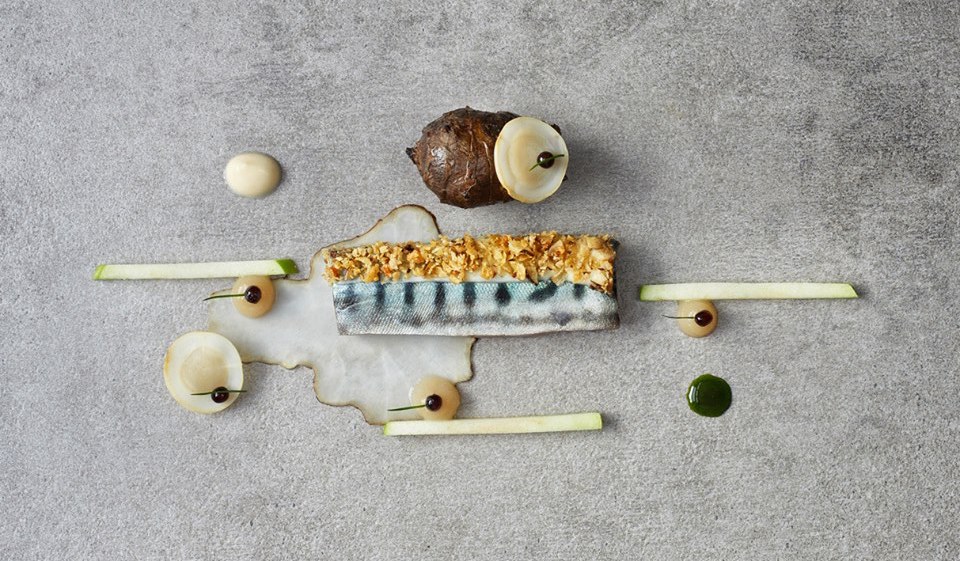 Returning to Vienna, he takes full advantage of his creative pursuits and his home and the international culinary community rewards him with rigorous reviews. His signature identity begins to be assembled, his signature dishes become “talk of the town” and this is not unheard of by Michelin’s inspectors and the reputable Gault & Millau guide, and he is awarded with a Michelin star at the Novelli restaurant, where he remained for five years.

It was then a matter of time for the doors of an area that would be a personal soul testament to open, as was the case with Konstantin, in 2013, and whose dynamics appeared in his first seven months of operation when he was awarded three Hats from the Gault & Millau guide. 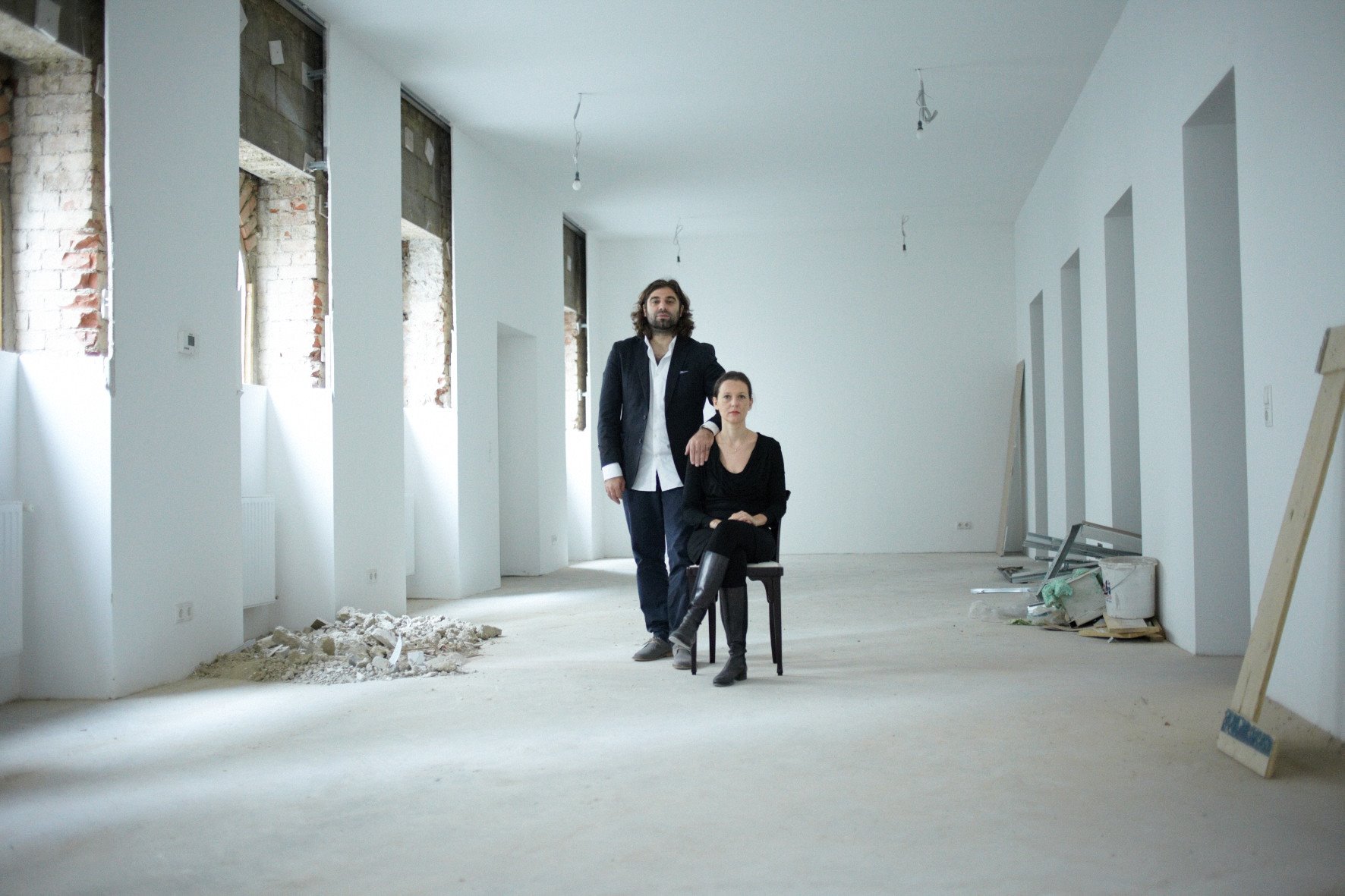 The first year was the award from Michelin, which gave him his first star. In the need to create something with a more “easy going” concept, in June 2015 he set up the wine bistro “O Boufés”, which Gault & Millau awarded with two Scouts in his first four months of operation, while in March 2016 Michelin rewards him for the good value-of-value award of his Bib Gourmand Award and the title of Chef of the Year.

The bistro “O Boufés” is basically the reflection of his Greek side with best-selling dishes such as shaganaki shrimp, veal stew cheeks and more. accompanied by more than 300 vinyl labels. “Our bistro is a gastronomic playground, a place for enthusiastic lovers of the kind and is in stark contrast to the restaurant. I am very happy and proud of that, “says the chef with enthusiasm, pointing out the considerable support of his wife, Emmanuela, at every step. 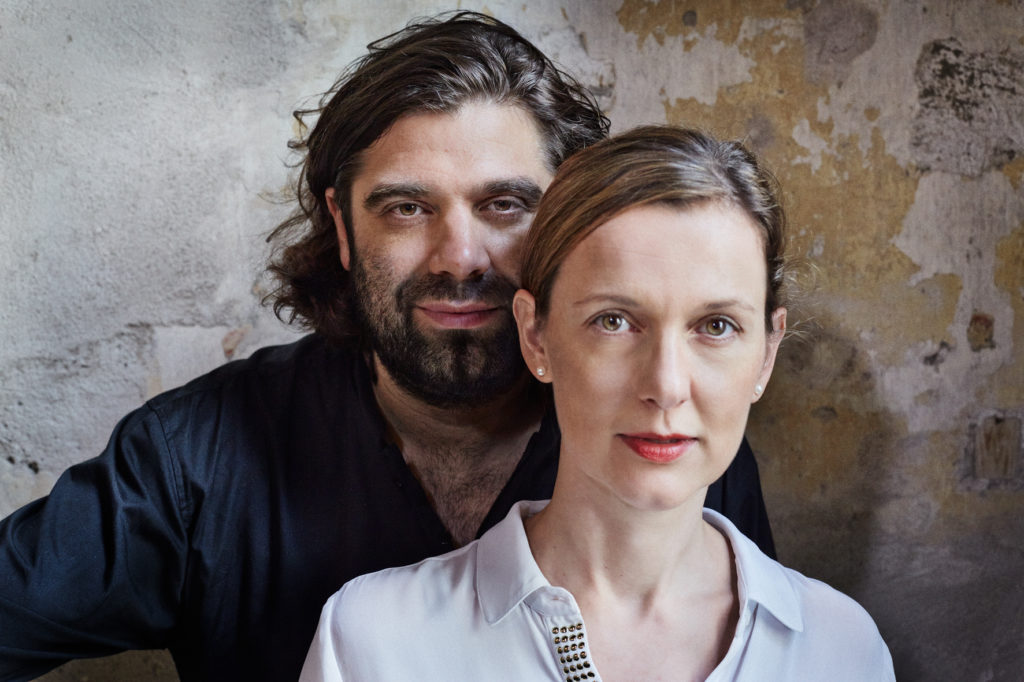 Konstantin Filippou is the undisputed star of the Austrian culinary scene, while in late 2018 it got its second Michelin star. He wants to offer his customers authentic flavors, to represent both his homelands. He believes that the menu of a restaurant should also reflect the characteristics of the place where the cook’s personality is.

On his one side there is Greece, the Mediterranean wealth of materials and extroversion. On the other, the robustness of Central Europe, the most minimalist Austrian approach. Konstantin manages to balance between them, since he has assimilated both influences. When he cooks only Greek, he is missing his Austrian side and vice versa, as he repeats at every opportunity. 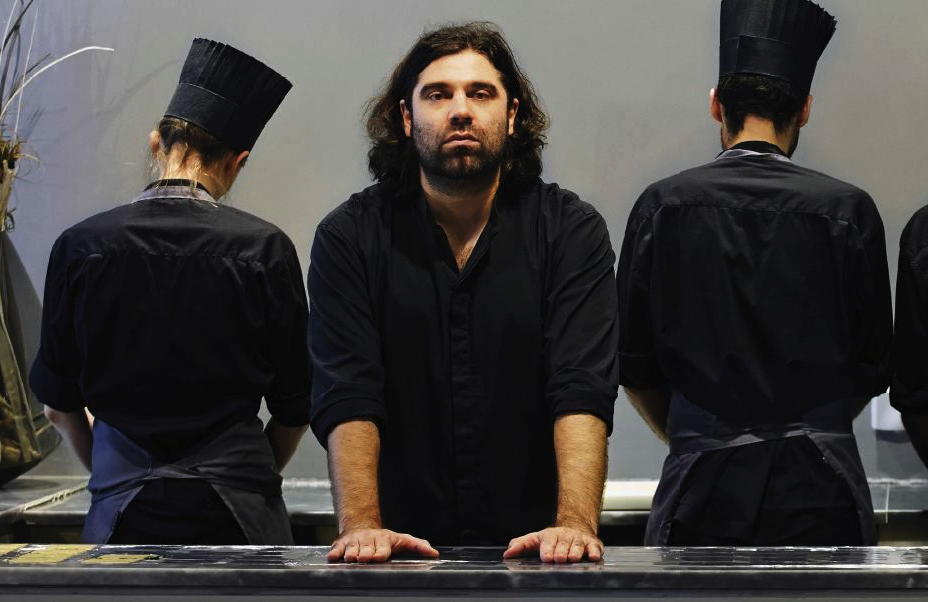 Perhaps, in order to try his kitchen, someone would not have to travel to Austria, since chef Konstantin Filippou is in favor of ‘gastronomic migration’ – in common with the pop-up restaurants opening in recent years – and may taste his creations on Greek soil, in the near future. “I love such efforts and I hope I can do that in Greece, somewhere beside the sea. Life is full of opportunities”, he concludes.