The work of Greek-American John Mavroudis has been published in many newspapers and magazines throughout the years, including TIME, The New Yorker and The Nation. Especially in the US he is well known for his work, as the 2006 cover of The New Yorker magazine on the 5th anniversary of September 11 attacks in New York was voted “The Cover of the Year” by the American Society of Periodical Publishers.

Mavroudis was born in Athens, although his father was from Alexandria, where he left to emigrate to San Francisco in the early 1950s. There, he helped set up the soccer team, San Jose Earthquakes, dealing with finance. When John became 12, the family moved to Los Angeles, where his father started a two-storey sporting goods business.

The famous artist painted a lot from an early age. In high school and college, he began to particularize his art in cartoon politics, originally published in the newspapers of his schools and Northridge University, where he studied Arts and Journalism.

Politics charmed him from the time when his uncle and his aunt listened. “My family was politicized. My uncle and aunt were involved in the 70s when Nixon was president. At 12, I was interested in politics more than any other child I knew. So in high school, I became a volunteer for a campaign for the first time in my life,” he explains. 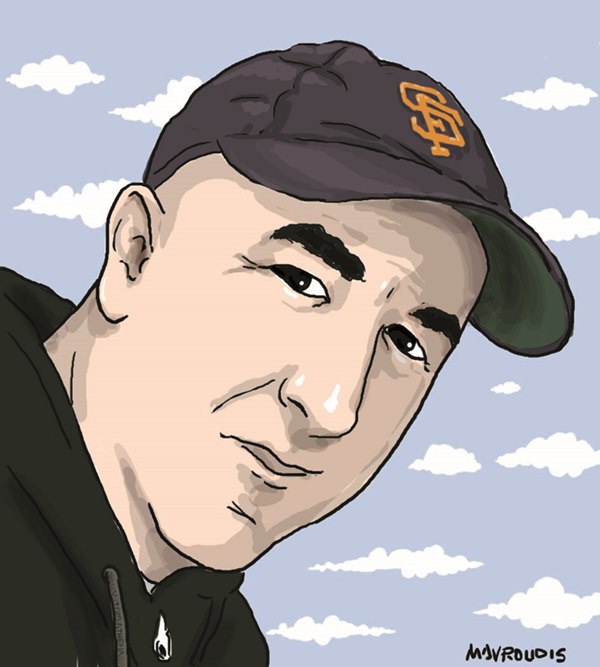 When he finished college, he started working with a graphic design software company and then switched to a newspaper. At the age of 27, he was already working with several newspapers on design and illustration. “At that time, I wasn’t sketching political cartoons, that was very rare.” His career was steadily rising, taking art director positions in magazines and newspapers.

At the beginning of 2000, John sent cartoon ideas to major US magazines but “They did not like the style I painted. They wanted the ideas, though, so they bought them and someone else painted them.” The first idea they bought was about a sketch for downloading music. Others followed from there, until in 2006, on the fifth anniversary of the terrorist hit at the Twin Towers, the idea of John Mavroudis became the double cover of the New Yorker (the September issue refers to the anniversary of the September 11 attack).

The sketch was Philippe Petit, the famous tightrope walker who, in 1974, crossed the distance that separated the Twin Towers at a height of 417 meters. Only on the double cover, Philippe Petit walks into the void without stepping on the wire that connected the Twin Towers, as they no longer exist. This cover was voted as the Cover of the Year by the American Society of Magazine Editors (ASME).

That was the cover that made him famous. There were several collaborations with magazines that wrote a story, such as the cover of Barack Obama’s oath in the most historic US magazine, the Nation – was created in 1865 – that made a great sense in the US. “The idea was to bring the new president together with all those famous people in history who helped in fact to elect an African-American President.” 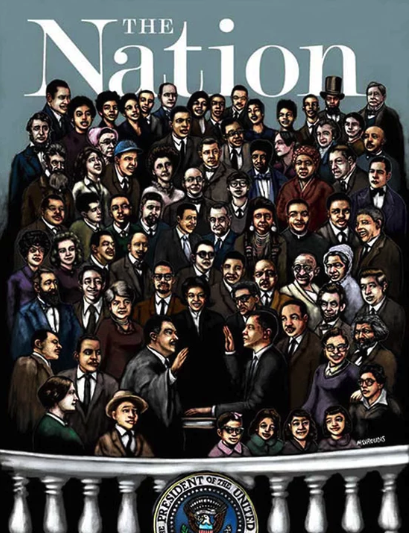 At this wavelength would be the New Yorker’s cover if Hillary Clinton was elected. “She would be named US President under the eyes of all the great women who made it a reality to take a woman for the first time at the helm of the country.” His non-election made him change his drawing a little. “I put Hillary aside and, in the position of the President who swears I placed the Statue of Liberty that held the US Constitution.” It was eventually used as a sketch for the women’s mobilizations that took place during the two-day swearing of President Trump. 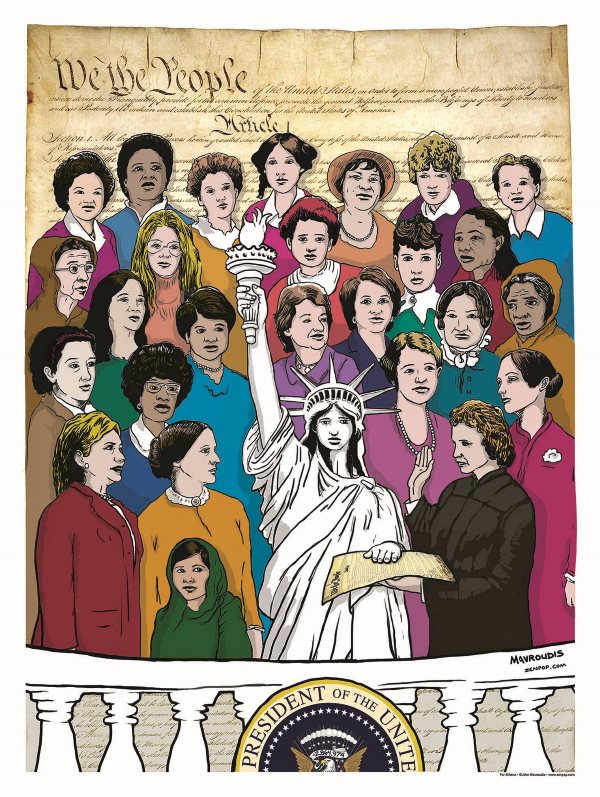 The political cartoon for Trump was not the only job of John Mavroudis that became viral in the US. Similarly, the cover for the Nation before the elections took place, where the form of the President of the USA is outlined in a number of words that many have publicly described him with. It was a cover that shocked people. “Yes, it was kind of shocking,” says in an interview with peoplegreece.com, “The most of the world’s reactions were like that. They called it “nice, but I can’t look at it”. But that was also the central idea of the cover. I was so angry about the possibility of him being elected. And all these words came to me that describe him. I probably left a lot of words out. With Obama, I had began to feel very proud of the country, but then Trump came. ” 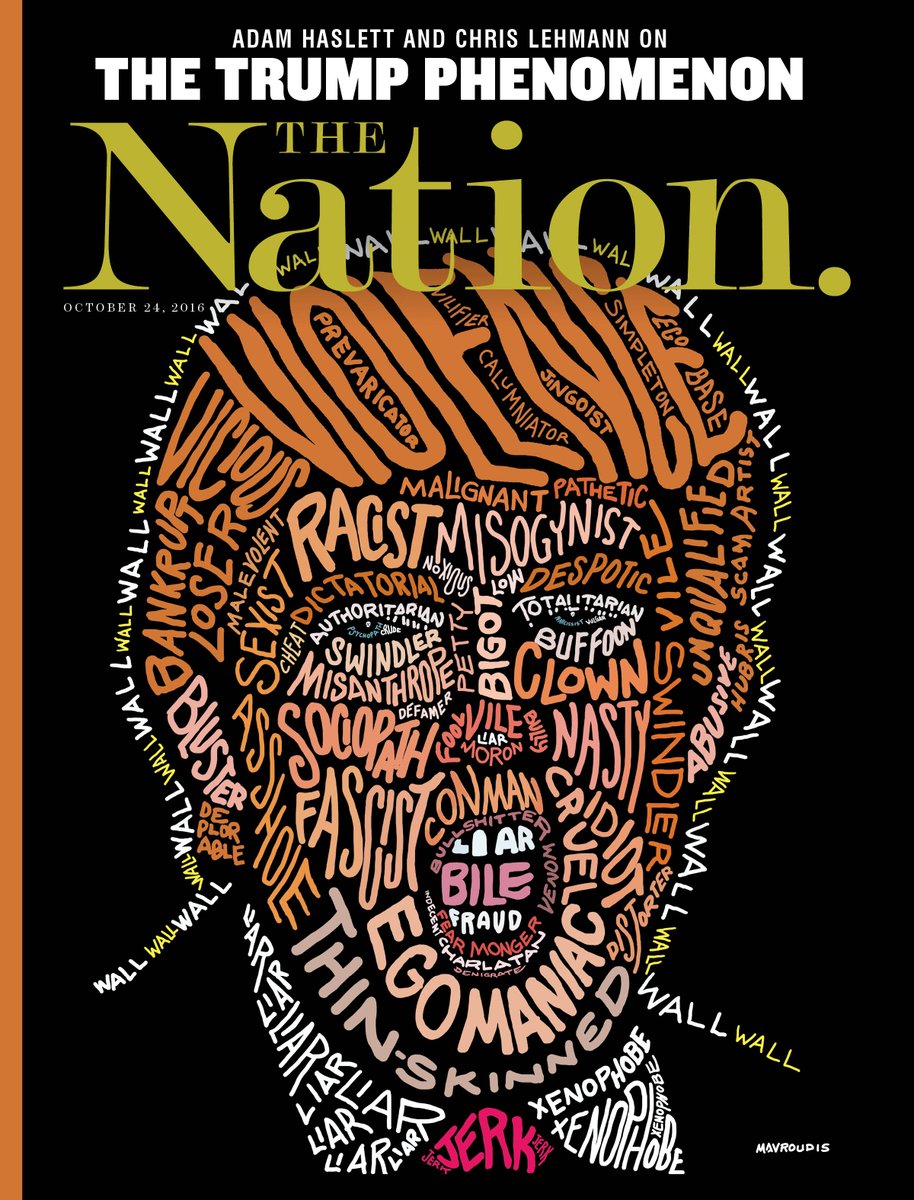 He speaks with nostalgia for Greece, which he has visited once. “We went to Athens, Delphi and Cephalonia. We plan with my wife to visit again,” he admits enthusiastically. In his everyday life he often acts as a Greek, since “From my father, I learned to always have at home olives from Kalamata. I put them as an accompaniment to every meal. And when we go out for food, I always ask for feta. Every two weeks we go for Greek food or visit relatives. It goes without saying that every Easter we traditionally cook lamb. We also go to the four Greek festivals that are held every year in San Francisco.

In my mind, I think of Greece very romantically. We plan to move there permanently with my wife. ” He is optimistic and wants to go against the outpouring of the young people – move that will be a powerful message for the reconstruction of a modern country.

The political and social situation has always been a source of inspiration for him. He designed the illustrated cover of TIME magazine for Monday, October 15, which is a portrait of Dr. Christine Blasey Ford, the woman who became the focus of attention in the US when she blamed Judge Brett Kavanaugh, the seat of the Supreme Court, for sexual assault.

The illustration of the cover is a portrait of Dr. Ford, completed by her testimony, the words she used before the Senate Committee of the Senate of the United States, and which caused strong feelings both for women and for men across the country and throughout the world.

In a TIME interview, Mavroudis said “This particular process is like putting together a jigsaw puzzle but with infinite possibilities” and added that he started with an image of Mrs. Ford and then drew the words where it would be appropriate. “The phrases mentioned in the memory are in the area of her forehead and those referring to the way she wants to help are in her hand. The hand could be a movement of welcoming as well as obstructing. ” On her forehead are mentioned phrases such as “I’m terrified”, “agonized daily” and “seared in my memory” while in her hand the phrases “traumatic experience”, “personal attacks and violation of privacy” and “death threats”.

The graphic designer of the political scene lives and works in San Francisco, California, at the moment, along with “my vast music and baseball card collection, my beautiful wife, Tam and our eight-year-old daughter and Art Director, Athena,” as he writes on his personal website.