Alexandros Tsiotinis is three times awarded a “Toques d’Or” in “Calypso” of “Elounda Peninsula”, has trained in some of the best restaurants in the world despite his young age, while the “Roots of Greece” dish won him the 1st place for the Mediterranean region in the international competition S. Pellegrino Young Chef of the Year 2015, claiming the world title.

Born on July 16, 1986, he grew up in Patissia, and from a very young age, he had a special relationship with food, which started from the Greek customary, Sunday table and the cooking of his grandmother, which helped to cook and lay the table since he was a child. At the age of sixteen, he had a life dream to open up his own business, “I didn’t want to be an employee, I wanted to do my own business,” he says in an interview with lifo. “And I was stuck with the idea that the most sensible thing was that if I had a business, it should be a restaurant.”

He started his culinary studies in 2002 and became a member of the Palmier Academy, with Yannis Baxevanis, who then cooked for the restaurant Chitra, and in the afternoons he helped him out pro bono because he wanted to gain knowledge and experience. The fact that his teacher had just returned from France and the fact that a friend of his was planning to go as well, made him decide to follow the same path, even though his knowledge in French was next to zero. 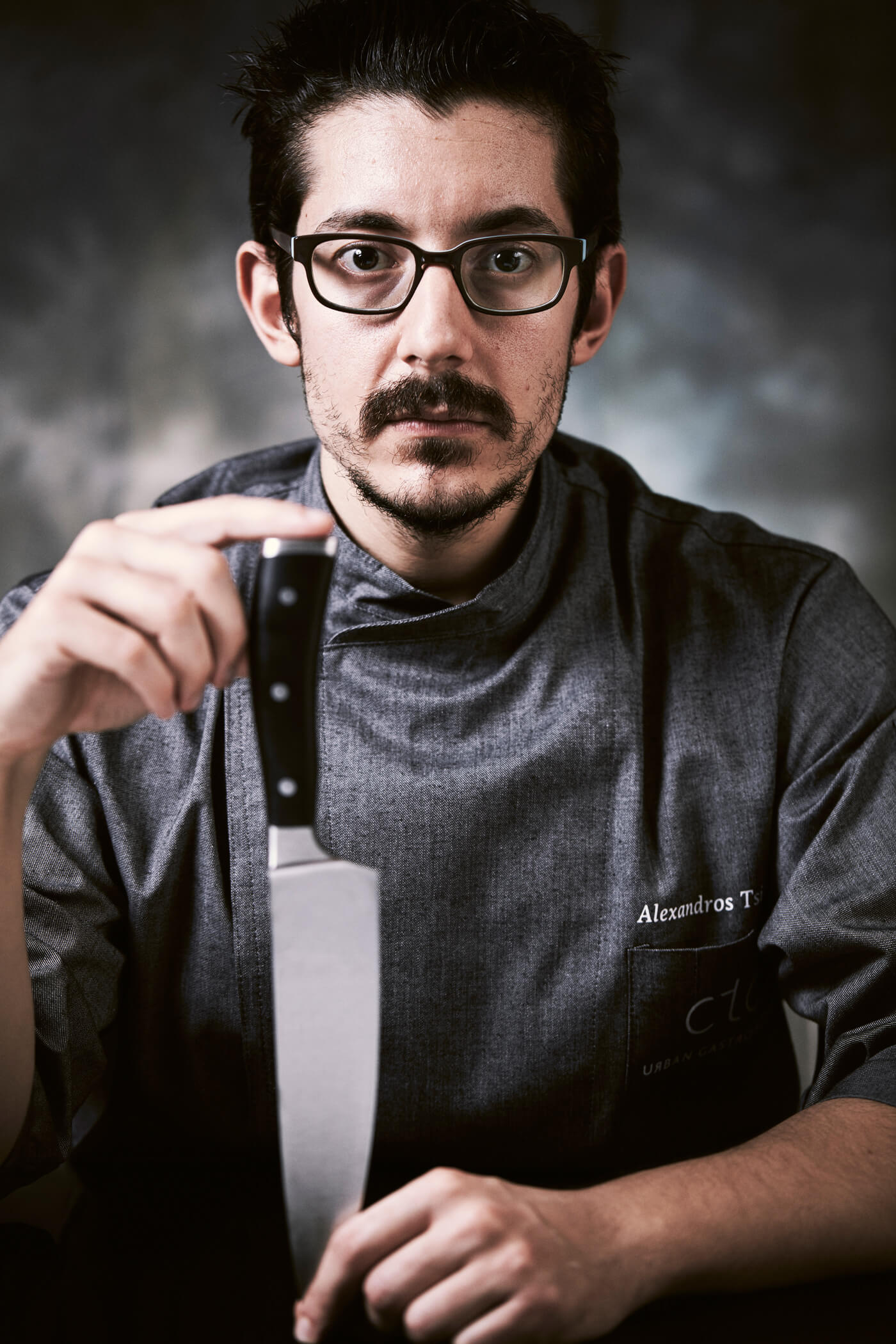 In Paris, he did two practices, one next to Alain Passard (3 Michelin stars) and the other next to Michel Bras (3 Michelin stars), and as soon as he finished his studies, he began to work as an assistant to Hélène Darroze (2 Michelin stars at the time). “The conditions were very difficult, the hours were inexhaustible, and the fatigue was huge. In two years, I lost 60 pounds. I left for Paris 130 pounds and I returned 72. The cook’s job is difficult and requires sacrifices, but I always thought in my life that if you do not invest in you, you will never gain anything. If you do not sacrifice things, if you do not work pro bono. I don’t hide it that, in Paris, I was working from 7 am to 3 am and from 5 am to 12 am – we are talking about 16 and 17 hours straight and. That’s how life is in a restaurant. ”

When that co-operation was completed, at a time when, due to the tiredness of the heavy schedule, he even thought of quitting cooking, he found himself in Spondi next to Arnaud Bignon, a man who had nothing to do with the other French whom he had worked with, as he admits. “Bignion was a very good guy who loved the job very much – he was the first to come and the first to leave the shop – and finally all that made me re-create the interest and revived the spark I had for cooking.” 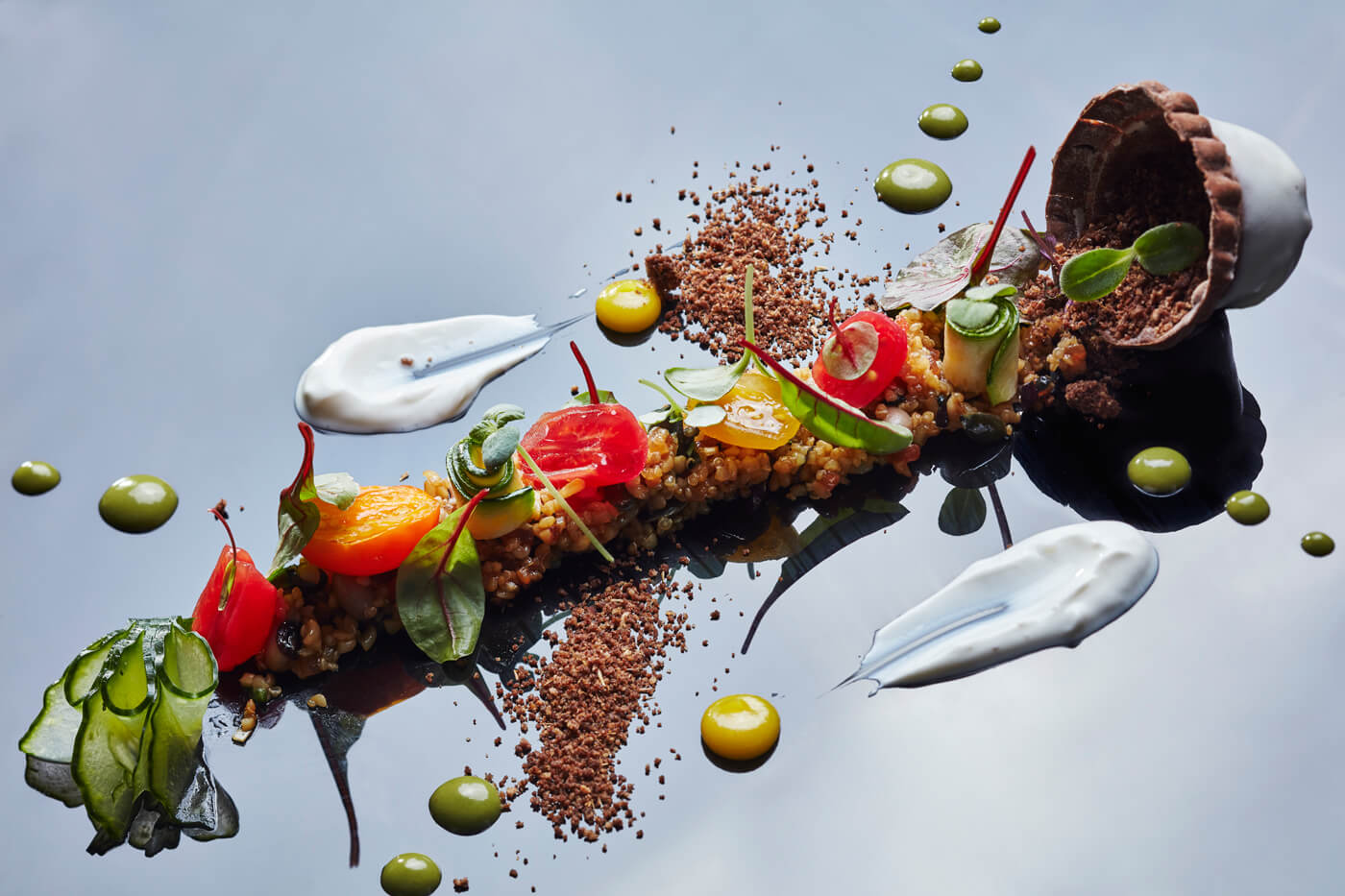 He was asked how he managed to reach out to all the people who seemed unapproachable because of their professional recognition and whether he was horrified by the idea of the three-Michelin-stars chefs, a question to which he replied that “If you do not aim for the best, do you advance? “. He even shared his experience of when he worked at Pascal Barbot’s L ‘Astrance, a 25-seat restaurant, with 3 Michelin stars, “a poetic place where all chefs want to work,” where he managed to win a place in a two-month practice because he sent his resume every month.

After spending time at Spondi as a chef de partie, there was an opportunity to go to the Éric Fréchon’s restaurant in Paris (Bistrol, 3 Michelin stars), where he was not just an assistant. After another year at the renowned restaurant, he collaborated with Vassilis Zacharakis, who wanted to be occupied with Greek cuisine.

The following winter, he worked in China on a cruise ship of a Greek shipowner cruising for prominent personalities of the Chinese political system and “I found myself cooking in the kitchen of a ship from a country with incredible poverty, indescribable. I was hugging the pots all day and whenever there was rough sea, I was in bed. It was an experience I would not want to relive. ” 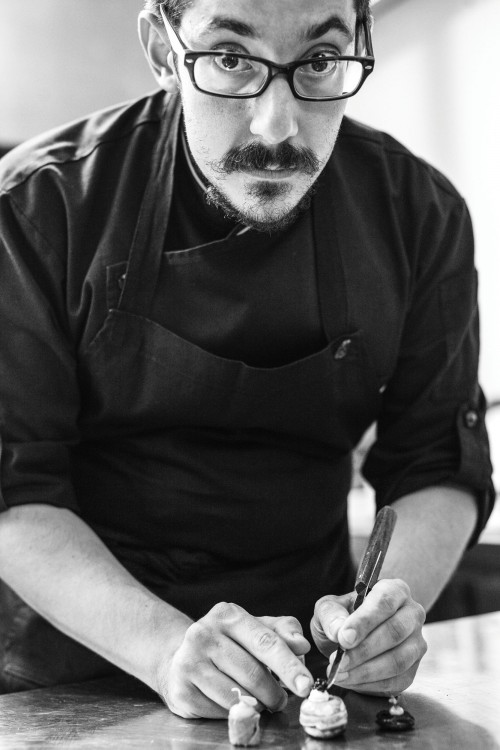 The Executive Chef’s position followed at the Hotel Elounda Peninsula in Crete and the winters in Brussels, where he made the card and menu of a restaurant for two years. He also worked in the best restaurant in the world, Noma in Copenhagen, although he thinks “For me, it was the most money that I have thrown away in my life. He did not have the trainees at the place where he was cooking his dishes. We were locked somewhere, not to steal his secrets. The title “The best restaurant in the world” is binding.

Objectively, there must be awards because it is motivated. Also, there is no limitation on how many Michelin stars should be in each city, there may be for every good restaurant. Renee surely deserves the title, no question about that. The issue, the best in the world for who? Who determines it?”

After that, he wanted to stop changing base every winter and summer and to find a permanent kitchen to which he would entirely devote himself. “I felt the need to find a port that would be mine for me to serve my ideas just as I do.” So, he opened the CTC (a pun derived from the Greek noun “sitisi” which means nutrition), a small space with 30 seats and a clean, strict aesthetics (gray walls, white tablecloths, porcelain dishes) that serves creative Greek cuisine. 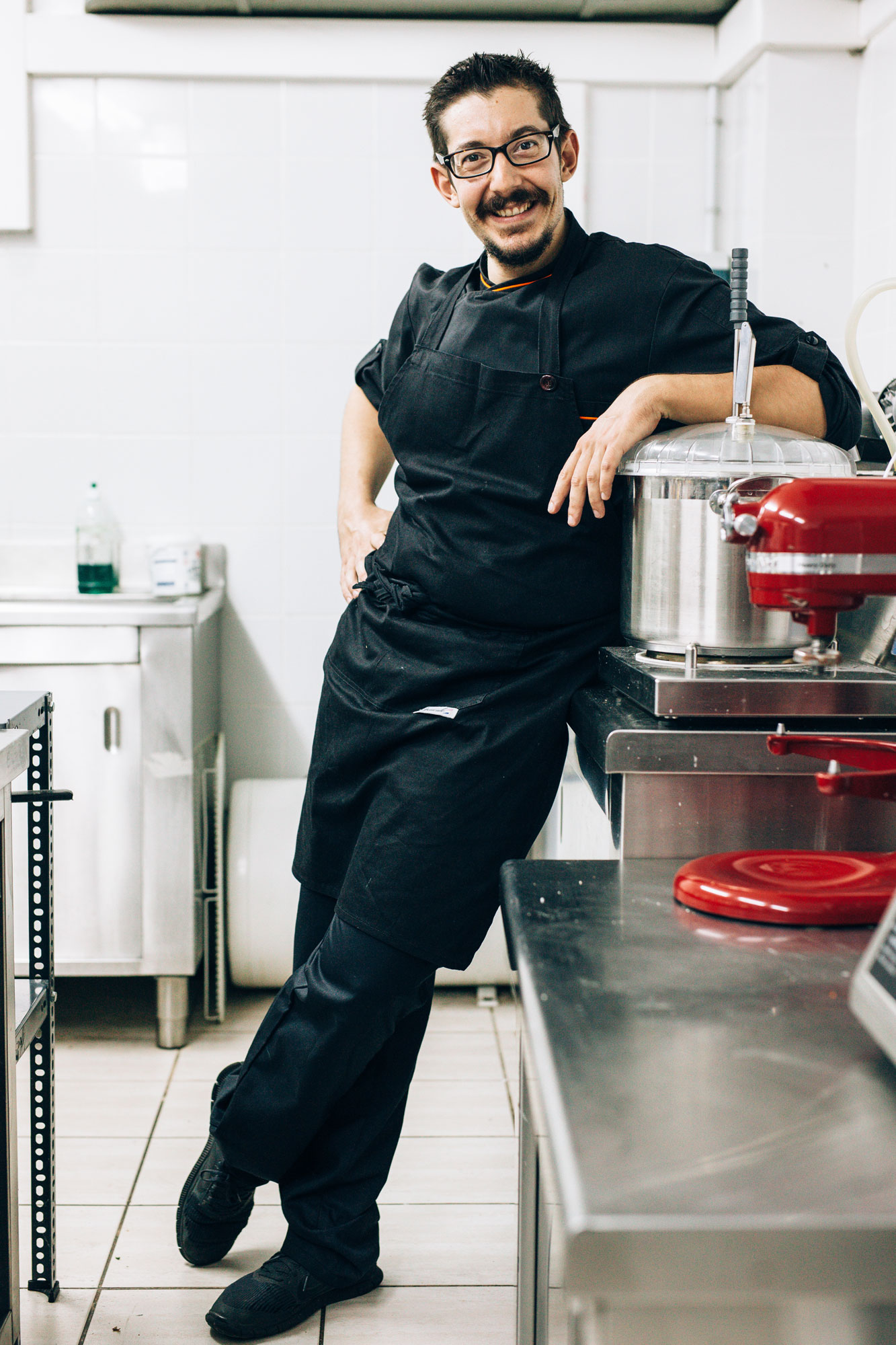 “My kitchen is a mix of the experiences I have gained after so many years,” he says. “Just because I am Greek and my influences are Greek, you will find trahanas in the menu as well, but you will also find a corn soup. And without being a goal in itself, I try to use Greek products.”

Furthermore, on every visit, CTC keeps notes of what customers ordered, so as they suggest something different the next time. The choice of dishes is limited but a lot of times it changes depending on the mood and ingredients the chef has.

He likes to compare cooking to painting. Being fond of colors, he parallels an empty dish with a white canvas which expects to be filled with genius. For him, the food looks like a trip and with his creations he aims to attract his “guests”, as he prefers to call his CTC customers, in a gastronomic journey where the aromas, textures and flavors alternate harmoniously and boldly. “My dream for CTC is to be the crossroads of different tastes and trends. To become the place where modern meets classic and the present it becomes one with the past and the future. ” 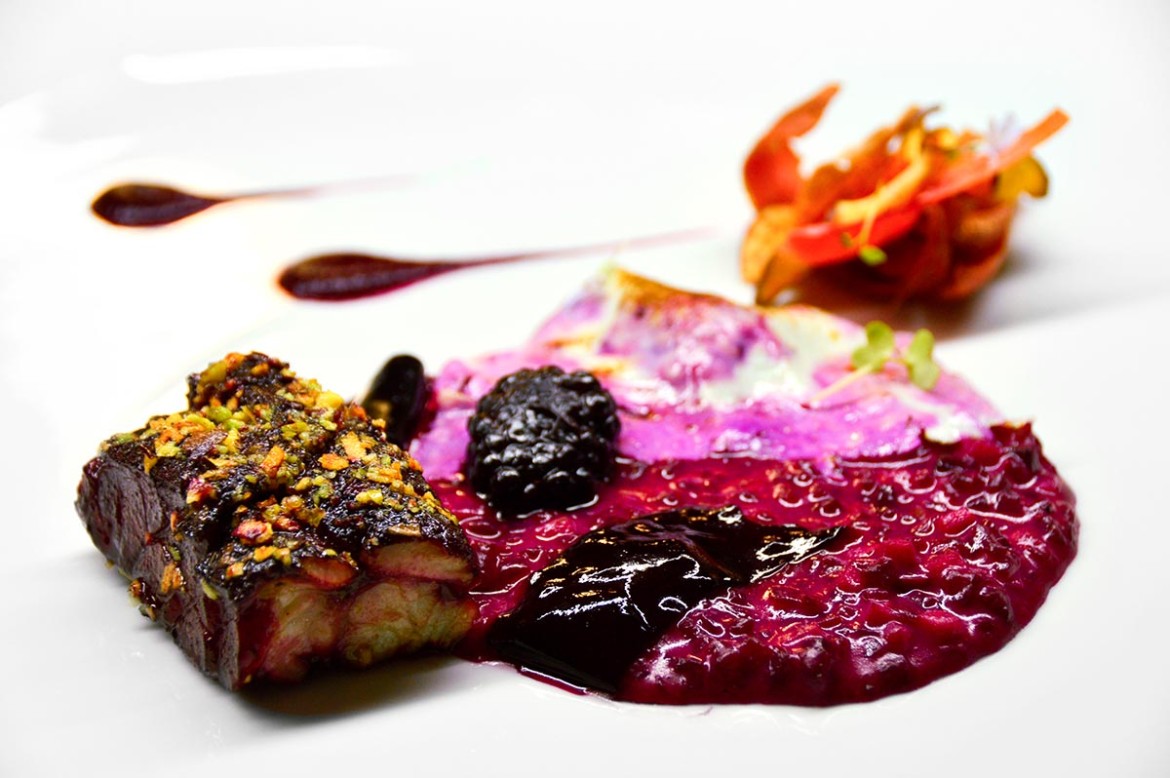 What music do you listen to?

“I love music, it relaxes me, it makes me travel while I am seduced. I am not a person with musical taboos, I can listen to traditional Greek music to rock. Okay, if you will, I try to avoid too loud music. However, when I work, I like to be stuck in the years of high school. A little Malamas is hanging out with Katsimihas Brothers while I’m filleting fish and the rest of the guys in the kitchen are filleting their veins. But I’m the chef, what can they tell me? ”

What books do you prefer?

“Although I fear you may consider me one-dimensional, I like cooking-books such as those of Anthony Bourdain, which combines my two great affections: travel and cuisine. But beyond that, I appreciate a good crime novel like those of Dan Brown, while Steven King doesn’t pass me by unnoticed”

“Movies? Good question … I don’t know whether I like movies or the preparation for viewing them. I love going to the cinema, I get a huge popcorn, good company and a great Coca-Cola Light. Beyond that, I do not have a standard type of movie that I love watching, for me they all have their time. However, if it’s a Hall of Fame, it would be Casablanca and maybe Pulp Fiction. ”

Are you involved in sports?

“I’m very busy with the gym – ifthe times I raise my hand to drink another sip of coffee count as repetitions of course. Don’t look at my six pack – I hide them carefully beneath my abdomen so they will not stare at me. I am joking. No, I’m not a sportsman – basically, to be totally honest with you, I’m very bored with anything it has to do with exercise. ”

“And who doesn’t occupy themselves with it nowadays? A bit of facebook, a bit of instagram, is a great source of fast news transmission. So I wake up in the morning, I drink my coffee and make a small social-media surfing in the everyday life of my country and my friends. ”

Are you watching TV?

“Do you believe that I miss the times when I was embracing the box and chilling with it? It was times of carelessness, lack of suffering, and the only thing I care about was the commercials. Unfortunately, I no longer have time, I mainly leave the house in the morning and return again late in the evening, usually after midnight. So, at best, a rerun or the remnants of a movie is my daily “dose” of television. Still, I love netflix. And if it happens and I stumble upon Friends, I get hooked.”

Do you travel? Do you have a favorite destination?

“Since I was involved in cooking, my life is an endless journey. A walk and a continuous search for new materials, combinations, techniques. Maybe that’s why I am avoiding leisure traveling, I enjoy Athens with no obligations. But if I have to say a favorite destination, that’s Paris. It is such a town-mongrel. She gives you the right, and perhaps to a certain degree, requires you to walk on it, to get into its rhythms, to feel the Seine next to you while you are looking at the buildings that you feel so fit in the dull weather.”

Which place do you call “home”?

“I am born-and-raised Athenian by a father and mother from Athens. I grew up in Patissia, I was born in Karamanlaki Square and I grew up there, I lived in this neighborhood for a few happy years. I remember walks with friends from the school in Fokionos Negri. It was fine then. Every Christmas, we walked with my father and watched the shopfronts. Even growing up, the neighborhood kept me close. As soon as I came back from France, it was the first place I searched for and found home in. ”

What does your current everyday life include?

“Now my day has a lot of CTC. This shop was my big childhood dream, it’s the point where I left a suitcase full of experiences and I turned it into food. I am happy every time I am behind the kitchen bar, I set up my dishes and I go out as a modern Zikos and share my gastronomic concerns with the people.” 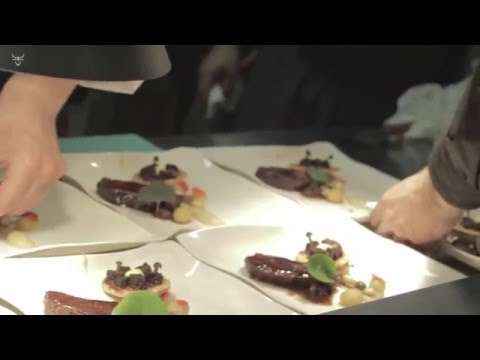