He has “enchanted” the Danish people with his desserts

Nikolaos Strangas is a famous pastry chef in Denmark. He has been living and working there for the last 15 years. He is the owner of Strangas Dessert Boutique in Copenhagen, and once a week he shows his desserts on Danish TV.

He was born in Pasalimani, Greece, in 1976, but grew up in Korydallos. He comes from Kalamata and Mani. When he was a child, he wanted to become a sailor like his grandfather and brother.

He has gained fanatic viewers and customers, among whom are many actors, politicians, journalists and singers. His famous colorful macarons are very popular with the Danes. One of the reasons he succeeded is that he managed to incorporate his pastry making into the customs of the Danes.

“The habits here are very different. You cannot come and serve something unknown and strange. You must adapt to the country’s culture and walk accordingly.”

“I am the only Greek at this moment on Danish TV, there is no one else. I really enjoy it. Being Greek here is not the easiest thing. The first three years were very difficult. The sooner you accept the others’ culture, the easier it is to integrate yourself”, he says.

He studied confectionery at the School of Tourism Professions in Rhodes and he attended baking seminars abroad.

Until 2001 he worked in the Hilton Hotel in Rhodes. He then worked for some years in Scotland until he left for Denmark where he worked at two five star hotels. He also worked for seven years at the Italian restaurant “Era Ora” in Copenhagen. In 2011 he won the “Best Sweet of the Year” award. Then, he opened the “Nikolaos Strangas Cakeaway” patisserie in Copenhagen. In 2012 he was honored by the Danish Gastronomical Academy.

“For me there is no secret to success. The secret is passion. Without passion, you can’t do anything. You can see baking from two perspectives: as passion and creativity and as business. I try to combine both of them”, he says.

He met his wife, Lotte, in Denmark. They have two children, Sophia and Marley. Strangas recently opened a pastry shop in Shanghai, China. He intends to expand his business activities to Greece, which he never forgets and visits often. 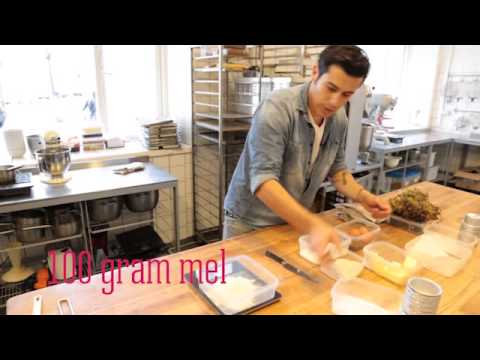