Commissioner for Aboriginal Children and Young People in Australia

Andrew Jackomos was appointed in July 2013 as the inaugural Commissioner for Aboriginal Children and Young People in Victoria, the first such position in Australia. He has both Aboriginal and Greek ancestry.

Andrew was the Director of the Koori Justice Unit in the Victorian Department of Justice from 2000 to 2014. There, he was responsible for coordinating the development and implementation of three phases of the Victorian Aboriginal Justice Agreement (AJA). He oversaw the growth of the Koori workforce, and the establishment and growth of the Koori Court network within the Magistrate’s, Children’s and County jurisdictions.

He has written two reports that describe the living conditions of the new generation of native Australians: “Always Was, Always Will Be, Koori Children” and “In the child’s best interests”, where he reveals failures across systems to care for Aboriginal children. Children in the three youth justice centers across Victoria are being subject to conditions likened to ‘the time of colonisation,’ according to the state’s Aboriginal Children’s Commissioner. Andrew Jackomos said some of the worst cases, in his eyes, involved the removal of toilet paper and family photos.

According to him, the delinquent behavior of young boys is largely due to intergenerational trauma, a result of the tough policies applied at the time of colonialism to Australian natives.

Andrew Jackomos is the son of Alick Jackomos (his grandfather’s name was Alexios) and Merle from the tribes Yorta Yorta/Gunditjmara. His grandfather from his father’s side was from Kastelorizo, Greece. “My heart is shared between the birthplaces of my ancestors. I am equally proud of both of my origins” Andrew Jackomos told the newspaper “Kathimerini”. The relations of the first immigrant Greeks with the natives of the distant continent have been recorded as extremely harmonious. As the Greek Commissioner said, the descendants of these marriages seek a reunion with their Greek roots and many mixed marriages have taken place.

As a descendant of a happy mixed marriage, he is a living example of healthy multicultural coexistence. In this context, he also spoke about what unites the two communities in the Greek Melbourne community. “I walked where my ancestors walked, I swam where they dove,” he mentioned, among other things, about the experience of his two recent trips to Athens and Kastelorizo. “Eating at local tavernas, I tasted the culinary delights of my Greek grandmother Asimina.”

According to him, Greeks and Aborigines have also been confronted with conquerors. The common destiny as “unwanted” brought them close the late 19th and early 20th centuries.

Those who know the family story of Andrew are not surprised by his work, as this comes as a natural continuation of his father’s activist activity, who devoted his life to the indigenous, after he met and married in 1951, at 25, the dynamic Merle, from Yorta Yorta. Alick Jackomos took part in the campaign for the referendum in 1967 targeting the recognition of the right of the Aborigines to be considered Australian citizens and be recorded at the population census.

Andrew’s links, however, with the Koori had begun much earlier. In particular, when he played as a child in the streets of Carlton, where his parents had a fish market, with Koori children who lived in neighboring Fitzroy.

When Jackomos is asked if he is the only Greek-Aboriginal, he replies that in the 1930s and 1940s there were other Greek men who married indigenous women. “I havespotted someone who has the same name as myself,” he says, “I have not met him, I do not know if he has roots from Kastelorizo.”

He is a member of the National Congress of Australia’s First Peoples, the Aboriginal Justice Forum, Aboriginal Children’s Forum, and the Indigenous Family Violence Partnership Forum. In 2006 he was awarded the Public Service Medal and was admitted as a Fellow of the Institute of Public Administration Australia (Victoria). Andrew has also been acknowledged as a Victorian NAIDOC Patron. He is a state and national Fellow of the Institute of Public Administration. 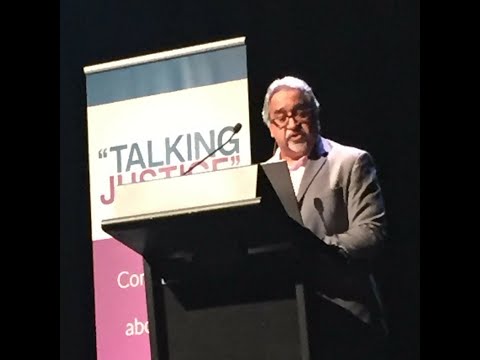