Studies the textile production in antiquity with impressive findings

Margarita Gleba is a senior research associate at McDonald Institute for Archaeological Research of the University of Cambridge. Her special area of study is the archaeology of textile production, including investigation of textiles, textile tools, as well as relevant written, iconographic and other sources. Recently, she published a study revealing major differences in the textile cultures of Italy and Greece in ancient times.

She received her BS in Biology and Art History at the Rutgers University in 1997. She then completed her M.A. and Ph.D. in Classical and New Eastern Archaeology at Bryn Mawr College with the thesis “Textile Production in Etruria: the Case of Poggio Civitate (Murlo)” and “Textile Production in Pre-Roman Italy: Archaeological Evidence”, in 1999 and 2004 respectively.

“Textiles have been and still are widely considered one of the most valuable indicators of individual and group identity. Even in societies today, we frequently form opinions of others based on the type of cloth they are wearing: tweed is associated with Irish and British country clothing, cashmere with Central Asia and silk with the Far East for example.”

She started working as a lecturer at Rutgers University in January 2005. She taught the courses “Greek and Roman Religion” and “Greek and Roman Mythology”. In October 2005, she worked as a research program manager at the Danish National Research Foundation’s Center for Textile Research. Part of her duties was designing research programs, coordinating research teams and the collaboration with international partners, engaging in joint material study and analysis, organising workshops and conferences and writing and co-editing articles and books. She remained in that position until September 2009.

Margarita Gleba was assigned as associate professor at the Centre for Textile Research of the University of Copenhagen for the period June 2009 – September 2009 and for the period October 2009 – September 2011 she worked at the Institute of Archaeology at University College London (UCL) as Marie Curie Research Fellow. She was then promoted to senior research associate at the Institute of Archaeology and later on worked as a European Research Council Principal Research Associate at UCL.

From July 2014 until now, she works as a senior research associate at McDonald Institute for Archaeological Research of the University of Cambridge. She is the principal investigator of a 5 year project funded by the European Research Council Starting Grant, entitled “Production and Consumption of Textiles in the mediterranean from 1000 to 500 BCE”.

“Luckily for us, during the Iron Age (c. 1000-400 BC) people were buried with a lot of metal goods such as personal ornaments, weapons and vessels. These metals are conducive to the preservation of textiles as the metal effectively kills off the micro-organisms which would otherwise consume the organic materials, while at the same time metal salts create casts of textile fibres, thereby preserving the textile microstructure. This is how we get such a large number of textiles, even though they only exist now in tiny fragments. Through meticulous analysis using digital and scanning electron microscopy, high performance liquid chromatography and other advanced methods we are able to determine a lot of information including the nature of the raw materials and structural features such as thread diameter, twist direction, type of weaving or binding, and thread count.” she explains. 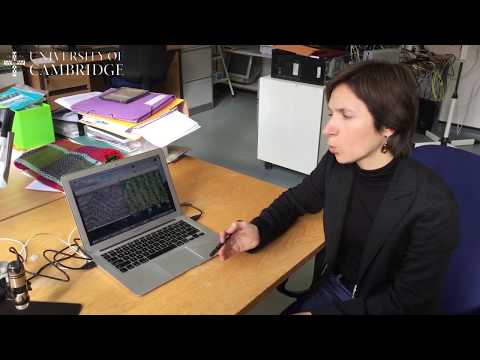