One of the world’s best female guitarists

Orianthi Panagaris has already been named as one of the best guitarists in the world. With notable collaborations on her CV, she has worked with Alice Cooper, Steve Vai, Michael Jackson, Carlos Santana, Michael Bolton, Prince, ZZ Top, Adam Lambert, Carrie Underwood, John Mayer, Dave Stewart and more.

Orianthi was born on 22 January 1985 and was raised in Melbourne. Her father played in a greek band and had filled their house with guitars and other musical instruments. As a consequence, Orianthi developed her interest in music when she was only six years old, while five years later she was already a competent electric guitar player.

A member of local Adelaide bands since she was 14, at 15 she left school to focus on writing and presenting songs. Her first public appearance was as support for Italian-American singer and guitarist Steve Vai. At 14 she released her first album,  ”Under the Influence”, consisting of cover songs composed by musicians, who inspired her. When she was 18, she had the chance to meet and jam with Carlos Santana, who asked her to join him on stage and kept her there for the entire concert.

Orianthi, who lives in Los Angeles, has signed with with Geffen Records and is preparing a new album. Until today, she has played with Prince, has been on tour with Steve Vai, has made a music video, has given one of her song for film “Bratz”, performed at Eric Clapton’s Crossroads Guitar Festival and appeared in The New York Times business section promoting eco-friendly acoustic guitars. She also appeared at the 51st annual Grammy Awards as country signer Carrie Underwood’s lead guitarist, and was consequently invited to join Underwood’s band. She was the one chosen by Michael Jackson as his lead guitarist for the “This Is It” tour, but his death put an abrupt end to this dream.

Orianthi released her major label debut Believe in the fall of 2009. The album produced the platinum single “According To You” which was a worldwide hit. Coming off the success of Believe and headlining shows around the world, Orianthi was asked to join Alice Cooper’s band in 2011, she worked with the band until 2014.

“I love working with Alice. I admire his longevity as an artist and he gives 110% every night,” Orianthi said. “I’ve learned something valuable from all the artists I have had the privilege to work with,” she says. That list is extensive and runs the gamut from Steve Vai, Michael Jackson, Carlos Santana, Michael Bolton, Prince, ZZ Top, Adam Lambert, Carrie Underwood, John Mayer, Dave Stewart and more. 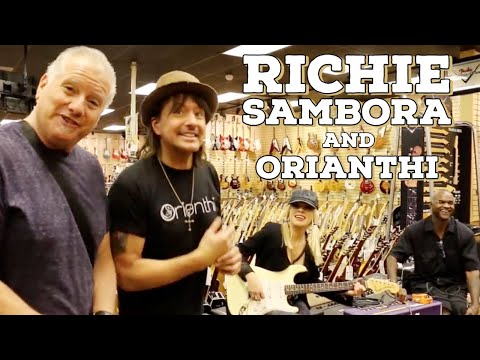