Christophoros Stamboglis is a Greek operatic bass who excels abroad. He has performed in many renowned lyrical theaters, such as the Metropolitan Opera House in New York City, the Royal Opera House, Covent Garden and the Grand Théâtre de Genève. His repertoire includes more than 70 roles and he has performed in more than 250 productions.

He was born in Athens in 1963. He studied violoncello with Christos Sfetsas and in 1981 he studied singing with Kiki Morfoniu. In 1983 he received a “Maria Callas” sponsorship and studied (with Vera Rosa) at the Guildhall School of Music and Drama, and later on in New York (with Armen Boyiatsian).

In 1987 he makes his debut in London, singing Figaro in the production of Pimiico Opera, where he remained as its fundamental artistic staff, up to 1990, interpeting Alfonso (Cosi fan tutte), Leporello (Don Giovanni) and Papageno (The Magic Flute). In Athens he sang Leporello (Don Giovanni) in 1989 close to Costas Paschalis, and the role under the same name in global premiere of Pericles Koukos “Konroi and his replicas”.

In 1991 he participated in the opening concert of the Athens State Orchestra at the Athens Concert Hall (Megaron). Later on he sang the role of Speaker (sprecher) in the “Magic Flute” and in global premier “Memoire brisees” of Thanos Mikrutsikos with the Chamber Philarmonic Orchestra of Karslruhe. The same year interpeted Poseidon (Retutn of Ulysses to his homeland). In 1992 he sang at the Festival of the Two Worlds of Spoletto (Chiefsingers of Nurnberg) and Maometo (The Siege of Corinth) at the Hellenic National Opera, with which he is in permanent cooperation since 1991 (Ferrando, Don Basilio, The Prince of Buyon, Collin).

He was a principal bass for Deutsche Oper am Rhein 2002–07. He has worked with esteemed conductors and directors on both the concert platform and the operatic stage, and has recorded for LYRA, EMI Classics, Bongiovanni Records, Fondazione Rossini and MDG (Diapason d’Or). 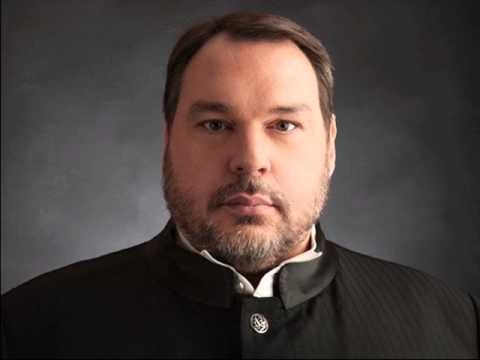