Steve Lappas is a game and studio analyst for Westwood One Sports’ coverage of NCAA Basketball and the NCAA Tournament. Prior to this position, he was a college basketball coach.

Steve Lappas was born on 18 March 1954. His father has origins from Perista Nafpaktias in Greece. He graduated from Bronx High School of Science in 1972 and continued his studies at City College of New York. There, he was a three-year letter winner in basketball and served as the team’s captain in his junior season. He graduated in 1977, with a bachelor’s degree in Primary Education.

In 1977, he started working as volunteer coach at New York College. A year later he became coach assistant at Fort Lee High School and in the next season he assumed the first head coach position at Harry S. Truman High School. Under his leadership, Harry S. Truman High School won a New York State Class A championship in the 1983-1984 season and he was named by New York Daily News, twice Coach of the Year (1981 and 1984). He remained in that position until 1984, where he joined Rollie Massimino’s staff at Villanova University.

Steve Lappas, in 1988, became coach at Manhattan College and earned the MAAC Coach of the Year honors in 1992. In 1992, he was assigned as head coach at Villanova, where he guided the team to a 174-110 record that included six 20-win seasons, a post-season NIT championship, a Big East Tournament championship and a Big East regular season championship. On 26 March 2001, he was assigned as head coach of the University of Massachusetts, where he tallied the school’s highest win total in its prior seven years. On 14 March 2005, he retired as a basketball coach, after a long and successful 28-year career.

After leaving the bench, Steve Lappas worked in the media as a college basketball analyst. In 2011, he entered his seventh season as one of the primary college basketball personalities for the CBS Sports Network (formerly, CBS College and CSTV), where he appears on game broadcasts and studio shows. He has also been a television studio or game analyst for MSG Network, ESPN Regional Television and CN8 (The Comcast Network).

Steve Lappas can often be heard on various sports radio talk shows across the country talking college basketball. On the web, he has been a regular contributor for CBS Sports’s online coverage of the sport, through its popular CBSSports.com. 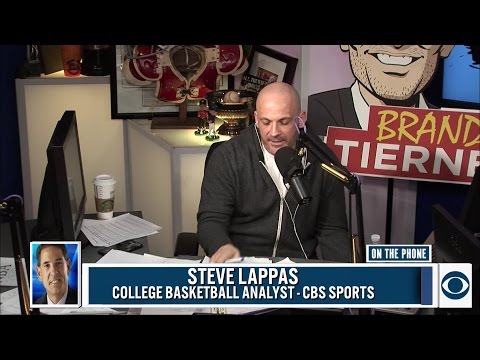