Enrique Metinides, for many decades during his career as a crime photographer captured murders, car crashes, criminals and catastrophes.

Metinides was born on 12 February 1934 in Mexico and he is of Greek heritage. He was born to a family of Greek immigrants in Mexico City. When he was 10-years old, Metinides was given a Brownie “box” camera by his father. He was soon using it to photograph car accidents on the streets of San Cosme in Mexico city, where he lived.

Two years later, he had published his first photograph in a local newspaper and at the age of 13, he became an unpaid assistant at the Mexican newspaper “La Prensa”. It’s where he got the name, “el niño”(The Boy). Soon, his eye was drawn away from the smashed-up vehicles to the human wreckage. So he started a long career photographing death, carnage and human suffering, often close up and in colour – a style that earned him a new sobriquet: “the Mexican Weegee”.

Once, when recalling his arrival to the scene of an airplane crash he stated that only after he shot his three rolls of film did he go to help with the rescue. What made Metinides’ work distinct and popular was not so much the themes but rather the inclusion of the faces of aggressors, corpses, other victims, emergency workers and onlookers for emotional impact.

“I have seen fires and explosions all kinds of disasters, but what always fascinated me was the people who would come to watch. The onlookers, you ask me if the reason they watch is out of some relief, that they are the onlookers thanking god they are not the victim, or their curiosity is simply a fascination with death. I think it’s much more simple than all these theories. People no matter where they come from love to be entertained they love spectacle and gossip,” the photographer said.

Metinides’ aesthetics are derived from popular film of his era, especially black-and-white actions movies related to police and gangsters. This movie influence can be seen in the sequence of photos, from environment to details, common for setting scenes in films.

“I think the biggest influence on my work has always been American movies, the early gangster movies… I think the cinematography and the light of those films really had the most impact on me,” he stated.

Metinides worked as a crime photographer from 1948 until his retirement in 1979.

A collection of 101 photographs selected by the photographer toured Europe and the United States under the name of the “101 Tragedies of Enrique Metinides.” The photos have also been published as a book with the same title, with extended captions and a biography of Metinides.

Other photos and works by him have been the focus of individual exhibits at many museums and galleries.
His work has won prizes from the Mexican government, journalists’ associations, rescue and judicial organizations and Kodak of Mexico. In 1997, he received the Espejo de Luz (Mirror of Light) prize, the highest given to photographers in Mexico.

In 2016 a new documentary film was made entitled “The Man Who Saw Too Much” looks at his life, at the man behind some of the most haunting pictures of crime scenes. 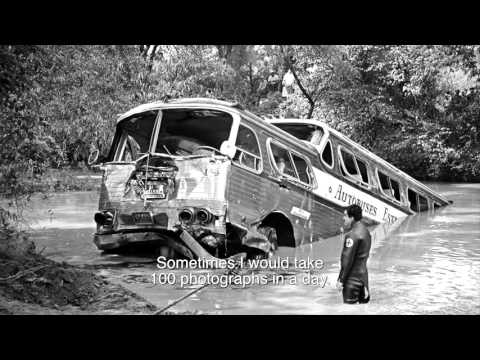