Played Gargamel in the adaptation of The Smurfs

Hank Albert Azaria is a well-known actor and he is one of the principal voice actors on the animated television sitcom “The Simpsons”.

Azaria was born on April 25, 1964 in Queens, New York. His grandparents on both sides hailed from Thessaloniki, Greece. Azaria’s father ran several dress-manufacturing businesses, while his mother raised him and his two older sisters, Stephanie and Elise.

After finishing the Kew-Forest School in Forest Hills, Azaria was obsessed with acting. He studied drama at Tufts University from 1981 to 1985. He and Oliver Platt starred in various college stage productions, including “The Merchant of Venice”, before Azaria trained at the American Academy of Dramatic Arts.

His first television debut with a role in the pilot episode of the 1986 ABC comedy-drama series “Joe Bash”, but his scene was edited out. Despite that he joined the Screen Actors Guild and after that he made several appearances on episodes such as “Family Ties”, “Growing Pains” and others.

In 1989 Azaria used his voice in the animated television show “The Simpsons”. A show that continues until present with unprecedented success. The first voice he performed was that of the town bartender Moe, redubbing Christopher Collins who had voiced the character in the original track. Afterwards he did the voice of the characters Lou the Cop, Chief Wiggum, Apu and many others in the same series.

Azaria was nominated for the Primetime Emmy Award for Outstanding Guest Actor in a Comedy Series for his roles in both “Mad About You” (in 1998) and “Friends” (in 2003).

He wrote and directed the 2004 short film “Nobody’s Perfect”, which won the Film Discovery Jury Award for Best Short Film at the US Comedy Arts Festival.

From 2004 to present, Azaria has performed in many movies (like “The Birdcage”, “Godzilla” and “Night at the Museum”), TV shows (“The Cleveland Show”, “Ray Donovan”, “Family Guy”) and used his voice for several animated series (“Happy Feet”, “The Smurfs”) and Video Games.

Azaria played Gargamel in the computer-animated/live-action adaptation of The Smurfs (2011). Azaria wore a prosthetic nose, ears, buck teeth, eyebrows and a wig, as well as shaving his head. He spent approximately 130 hours in the make-up chair over the course of the production. Azaria considered Gargamel’s voice to be the most important part of his performance. The producers wanted an “old, failed, Shakespearean actor” voice, but Azaria felt this would lack energy and wanted something more Eastern European.

He has won three Primetime Emmy Awards for his work on the show in the category “Outstanding Voice-Over Performance”. Hank Azaria and Katie Wright have a son, Hal. 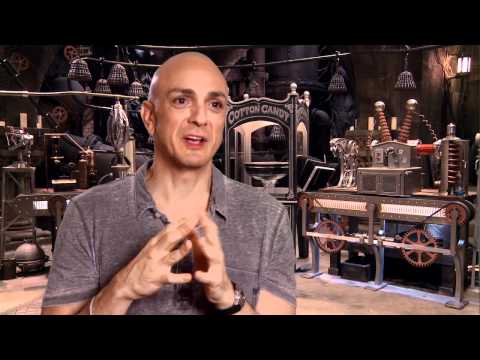