One of the few Greek professional NFL Players

Niko Koutouvides is a former American football linebacker. He was drafted by the Seattle Seahawks in the fourth round of the 2004 NFL Draft.

Koutouvides was born on 25 March 1981 in New Britain, Connecticut. His paternal grandfather fled Asia Minor during the Greek-Turkish War and settled in Tanzania, Africa. His father, Stelios, moved afterwards to the United States. His mother, Niki, is from the Greek island of Kefalonia. His passion for football began after his older brother, Aris , started playing at college.

Koutouvides started playing football when he attended Plainville High School and was soon named MVP (Most Valuable Player). He topped the team in sacks and ranked second in tackles in 1999.

Afterwards he went to Purdue University in West Lafayette, Indiana of the United States where he joined the university team. As a junior, Koutouvides started all 13 games and notched a career-high of 121 tackles (80 of them solo) to lead the team to their 6th straight Bowl game appearance. In his senior year he won the Hammer Award as Purdue’s best tackler. Koutouvides was named first team All-Big Ten by the media and second team by the coaches after starting every game as middle linebacker.

In 2004, Koutouvides was drafted by the Seattle Seahawks in the fourth round of the 2004 NFL Draft. During his four seasons in the team, he had more than 280 tackles. Koutouvides and his team managed in 2006 to reach the finals of Super Bowl against Pittsburgh Steelers.

His next team was Denver Broncos. Koutouvides signed a $7.5 million contract for three years but after the first season, in 2009, he was released.

On March 2, 2009 Koutouvides signed with the Tampa Bay Buccaneers and becomes immediately one of the Buccaneers’ top special teams’ performers. Koutouvides in August of 2011 joins the New England Patriots. He was cut on September 3 but re-signed on November 9, 2011 and went on to appear as a member of the special team at the 2012 Super Bowl. On 26 August 26 2013, Koutouvides leaves the Patriots.

When asked about his career, Koutouvides said: “My Greek pride helped me. The rest of the people can’t understand the flame we Greeks have and the passion for whatever we do. We are a proud people. This pride brought me here. I kept on improving”.

Outside NFL, Koutouvides holds a youth football clinic in Plainville. During those events, he wants to show young boys and girls they can have a good time away from all the gadgets they have today. His goal is to help the Plainville Colts youth football program continue to grow as the sport tries to find a niche in Plainville. 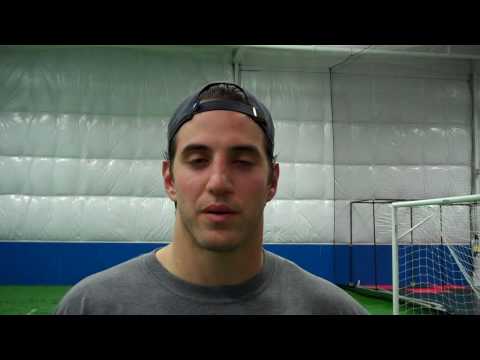