Vocalist of the show Kurios by Circue du Soleil

Eirini Tornesaki is the vocalist of the show Kurios by Circue du Soleil. Her character is called “Chanteuse de Rue”.

E. Tornesaki was born on 23 July 1991 in Heraklion, Crete. During her high school studies, she was also participating at the Conservatory and arts schools, where she studied theatre and acting for a year, jazz dance for six months, classical piano for seven years and cello for five years. In 2012, she received her B.A. with honors from the University of Sussex (Bimm) in professional Musicianship and in 2016 she received her certificate from Berklee Online, the online extension school of Berklee College of Music, as a songwriting specialist.

In 2007 she won the 1st place at the 13th Pancretan Singing Competition. In 2009, E. Tornesaki sang with Amy Winehouse’s backing band at Komedia, Brighton in the United Kingdom and in 2010 she was the vocals for James Bay. The same year she performed at the 3rd International Jazz Meeting on Crete. A year later, she sang “One Voice” at the show “An audience with Barry Manilow” at BBC-ITV1 and also recorded on the Saw Doctors’ single “Indian Summer” and “Kitchen at Parties” with JonaLewie.

For the period 2011-2014, she sang with Motown Supreme, Function Band and Goldwaxx bands.
In April 2012, E. Tornesaki collaborated with Classico Latino, singing in their 3rd album “A Journey through Latin America”. She then travelled with them to Colombia to promote the album with a concert in Teatro Colsubsidio in Bogota.

E. Tornesaki, in 2013 she worked with Wise Buddah Creative Ltd. and in 2014 she collaborated with Nick Pitera.
Since January 2014, she has been working with Cirque Du Soleil in the show Kurios – Cabinet of Kuriosites, touring Canada and the United States. She is the only singer in Kurios and her character is called ‘Chanteuse de Rue’, which means “Street Singer” and wears a gramophone on her head.

On February 2015, she sang in the Samsung Virtual Reality short film of Kurios and won the “Day Time Emmy Award” and on September of the same year she sang the USA National Anthem at Wrigley field, in Chicago. 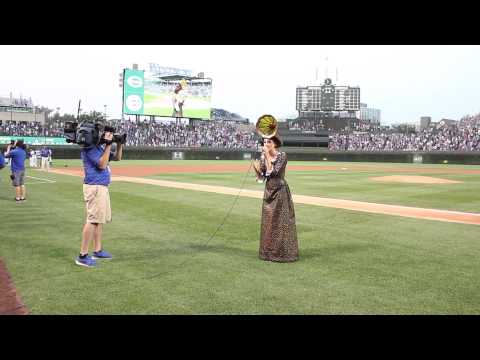