Weatherman at TV station in US

Prokopis or Kopi Sotiropulos is a longtime weatherman for the KMPH-TV and has played numerous roles for major Hollywood films.

Sotiropulos was born on 12 September 1948 in the Peloponnesian Penisula area of Greece. He and his family moved to Fresno, California.

“Having been born in the Peloponnesian Penisula area of Greece during the middle of the last century, (I never thought I’d say that phrase!) I was really concerned about the upcoming move to America. How could I leave a country that had nice warm summers, mostly mild winters and beautiful beaches?” Kopi says in his page at KMPH-TV.

He started school at the Hamilton Jr. High. and afterwards at Fresno High. Sotiropulos loved sports and mostly baseball. Afterwards he went to San Francisco where he majored at broadcasting.

“My first day at Fremont Elementary was interesting. I didn’t know a word of English, but I smiled, made friends and learned. I went on to Hamilton Jr. High, where I became Student Body Vice President” he remembers.

Once Sotiropulos graduated, he started working in his chosen profession with KMPH TV 26 in Visalia. He was hired as a commercial copywriter in October of 1971, the month KMPH began broadcasting. For six years he wrote, produced, shot, edited and performed in commercials and promos, and hosted “Dialing for Dollars”.

In 1977, he and his wife Elaine, move to Hollywood to pursue a career in acting. Sotiropulos worked with some major Stars such as Eddie Murphy, David Letterman, Michael Keaton, Mary Tyler Moore, Bill Bixby, Goldie Hawn, Michael Landon as well as many others.

In 1992, Sotiropulos moved back to Fresno and since then he is the weatherman of KMPH FOX 26 Ten O’clock News.
Kopi Sotiropulos is a primary promoter and participant in ethnic Greek celebrations in Central California.
His personal motto: “Start your day with a smile”. 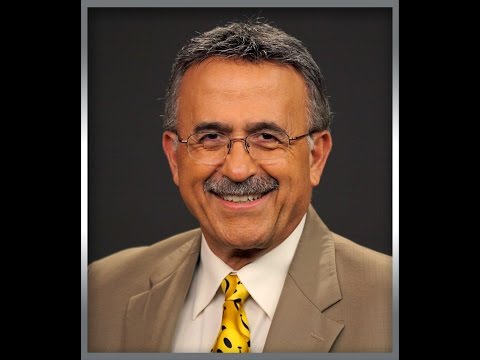