Chris Sarandon is a Greek-American actor and voice actor. He is best known for playing Prince Humperdinck in the film The Princess Bride, the vampire Jerry Dandrige in Fright Night and Detective Mike Norris in the first entry of the Child’s Play series, and for providing the voice of Jack Skellington from The Nightmare Before Christmas, and Captain Jack from James and the Giant Peach. He was nominated for an Academy Award for Best Supporting Actor for his performance as Leon Shermer in Dog Day Afternoon.

“Being on stage is a seductive lifestyle. My advice to aspiring actors is think twice. People sometimes go into acting for the wrong reasons – as a shortcut to fame and fortune. If these goals are not attained, they feel a bitter disappointment. Acting should be an end in itself”, says Sarandon who was born and raised in Beckley, West Virginia, the son of restaurateurs Cliffie (née Cardullias) and Christopher “Chris” Sarandon, Sr. His mother is of Greek descent, and his father, whose surname was originally “Sarondonethes”, was born in Istanbul, Turkey, of Greek descent.

He graduated from Woodrow Wilson High School in Beckley. He went on to West Virginia University and earned his degree in performing arts magna cul laude. He earned his master’s degree in theater from The Catholic University of America (CUA) in Washington, D.C.. While attending the university, he fell in love with Susan Tomalin, a classmate whom he married in 1967. After graduating, they both pursued acting careers, with Susan taking his surname as her professional name and performing under the name Susan Sarandon. They would later divorce in 1979. She would later partner up with Tim Robbins.

After graduation, he toured with numerous improv companies and became heavily involved in regional theatre, making his professional debut in The Rose Tattoo in 1965. In 1968, Sarandon moved to New York, where he landed his first television role as Dr. Tom Halverson on The Guiding Light (1973 – 1974). He appeared in the primetime TV movies The Satan Murders (1974) and Thursday’s Game before landing the role of Al Pacino’s transsexual wife in Dog Day Afternoon (1975), a performance which earned him nominations for Best New Male Star of the Year at the Golden Globes and the Academy Award for Best Supporting Actor.

Sarandon has also appeared in The Rothschilds and The Two Gentlemen of Verona on Broadway, as well making regular appearances at numerous Shakespeare and George Bernard Shaw festivals in the United States and Canada. He also appeared in a series of television roles, some of which (such as A Tale of Two Cities in 1980) mirrored his affinity for the classics. He also took roles in horror films opposite the late Margaux Hemingway in the thriller Lipstick (1976) and as a demon in the shocker The Sentinel (1977).

To avoid being type cast as villainous characters, Sarandon took on various roles in the years to come, portraying the title role in the made-for-television movie The Day Christ Died (1980). He received accolades for his portrayal of Sydney Carton in a made for television version of A Tale of Two Cities (1980), co-starred with Dennis Hopper in The Osterman Weekend (1983), which was based on the Robert Ludlum novel of the same name, and co-starred with Goldie Hawn in Protocol (1984). These were followed by another mainstream success as the vampire-next-door in the teen horror film Fright Night (1985).

In 1991 he performed on Broadway in the short-lived musical Nick & Nora (based on the Thin Man film) with Joanna Gleason, the daughter of Monty Hall. Sarandon married Gleason in 1994. They have appeared together in a number of films, including Edie & Pen (1996), American Perfekt (1997) and Let the Devil Wear Black (1999).

He returned to Broadway in 2006 playing Signor Naccarelli in the six-time Tony award-winning Broadway musical The Light in the Piazza at Lincoln Center. Most recently he appeared in Cyrano de Bergerac as Antoine de Guiche, alongside Kevin Kline, Jennifer Garner and Daniel Sunjata. He is on the Advisory Board for the Greenbrier Valley Theatre in Lewisburg, West Virginia.

“As an actor, we are, in a way, a mirror of other people”, says Sarandon commenting on the profession of actor. 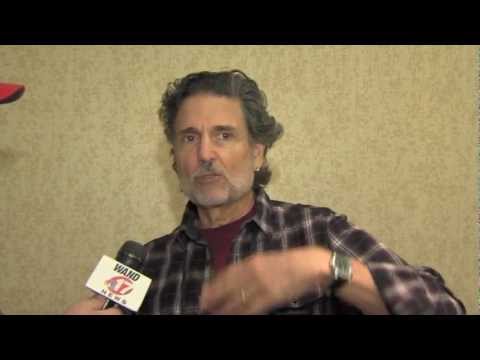