He makes gardening a trend in Australia

Costa Georgiadis is the host of the ABC’s Gardening Australia program.

He is a second-generation Australian of Greek heritage, Georgiadis was born in Sydney and grew up in North Bondi.

At the age of 15, he visited Greece for eight weeks and when he returned he said to his parents “Thank you for making me learn Greek”.

After finishing school, he studied landscape architecture at the University of New South Wales.

He started his first television show as host of Costa’s Garden Odyssey. Georgiadis takes a holistic approach to gardening and horticulture, emphasising the importance of water and its management and the benefits of sustainable living and spreads his green wisdom while communicating with people and celebrating cultures and community.

After 25 episodes, SBS stopped the production.

After the show, ABC knocked his door looking for a change for the show “Gardening Australia”.  Georgiadis goes beyond gardening to making the whole world his garden. He speaks about healthy food, the health of the environment, of the ecosystems and he wanted health to be a big part of the show.

A long talk has been given also about his beard. He hasn’t cut it for over 20 years and in a question about cutting it he replied: “What do they say in that Bond film? Never say never!”

His dreams are to continue to inspire people to put food and nutrition as the priority in their life, to let go of the consumption and the accumulation and just go for the simple here and now importance of taking note of everything they put in their body, building up an internal composting system that takes every bit of mineral out of their food and fuels a state of health and state of mind that gives them the opportunity to have visions, dreams and the capacity to achieve them. 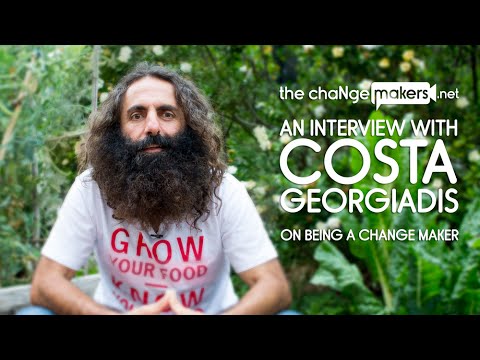