First woman ever to umpire men’s US Open final

Eva Asderaki-Moore is a Greek tennis umpire and the first ever woman to umpire a men’s final in the US Open. Asderaki was the umpire for the final between Novak Djokovic and Roger Federer. She has then been the chair umpire at the Australian Open and many other tournaments.

She was born on 27 January 1982 in Greece and she has been umpiring for more than half of her life. She also has experience of overseeing finals at major tournaments in the ladies’ game.

The Greek tennis chair umpire is one of only a few women to hold a Gold certification from the International Tennis Federation.

At the 2011 US Open, she made the news when she got in a vocal altercation with Serena Williams during the Women’s single’s final.

Asderaki started to play tennis from a young age.

“I used to play tennis in Greece when I was younger and in 1997 I helped as a line judge during an International Tournament that was held at my tennis club. I really enjoyed being on court doing something other than playing, and I met chair umpires from other countries who told me about their travelling experiences. At the age of 16 it all seemed very exciting!​,” she said.

The first mach where she umpired was during a $10.000 Women’s tournament in Athens and she was sent there to work during the qualifying weekend.

Her favourite thing about umpring is traveling.

“Thanks to umpiring I have travelled to so many places around the world that I would probably have never been to otherwise. Meeting different people and experiencing different cultures is fascinating, but the best thing by far is making some really good friends from all over the world,” she said.

As she noted in an interview the hardest part of being an umpire is that she has to stay away of her home and her loved ones for many weeks.

“As much as it is nice travelling and seeing the world, being away from family and friends for a long time is something that I find difficult. I miss birthdays and celebrations, and people inevitably forget to include you in some things as you are normally not there. Not being there if something bad happens is always my biggest worry.”

She spents 20-25 weeks away from home during tournaments.

“Being a tennis umpire is an exciting and fascinating job. It can take you to amazing places – from Uzbekistan to New York – and you meet a lot of people. But like every job, it has its drawbacks; you miss family events and you spend many weeks on the road,” Asderaki said.

In an email to USA Today, her husband Paul wrote: “To be the first woman to umpire a men’s final at the U.S. Open is amazing. I’m so proud of Eva and unbelievably happy for her. She works so hard and has sacrificed plenty to get to this point, and a match like this makes all of that worthwhile.” 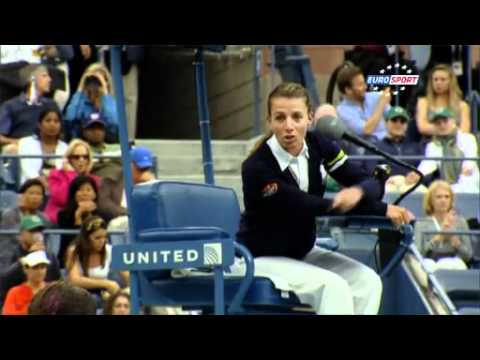