The three Greek sisters who fascinate Canadians with their cookbooks

Betty, Eleni and Samantha Bakopoulos are the three Greek sisters who fascinate Canadians with their cookbooks dedicated to Greek cuisine. They are known as “The 3 Greek sisters”.

The three sisters have written two cookbooks: “Three Sisters Around the Greek Table” and the “Three Sisters Back to the Beginning: Timeless Greek Recipes Made”

Their first cookbook, “Three Sisters Around the Greek Table” received a Gourmand World Cookbook Award (2009), and New York Book Festival (2011), Best Cookbook of the Year Award and it is a national best seller.

Betty Bakopoulos, a former teacher, is most at ease in her kitchen preparing meals and feasts for family and friends.  Her tireless efforts and desire to pass on family recipes to her three daughters brought to light the majority of the recipes in Three Sisters Back to the Beginning and Three Sisters Around the Greek Table.

Eleni Bakopoulos is an accomplished artist with exhibitions and distinctions worldwide.  Her love of photography and her passion for food and family found expression in Three Sisters Around The Greek Table.   For their second cookbook Three Sisters Back to the Beginning, she travelled to Greece, documenting childhood, and the connection between family, place and identity.

Samantha Bakopoulos was a passionate teacher of young children for many years before her love for cooking spurned on the idea and the partnership that brought about
the creation of the books Three Sisters Around the Greek Table and Three Sisters Back to the Beginning.  These projects balanced her talents in the kitchen with the office, where she mastered graphic design, photography, and social media.

The cover of the first book, “Three Sisters Around the Greek Table,” was of Betty’s three daughters.

The cover of the second book “Three Sisters Back to the Beginning: Timeless Greek Recipes Made” shows Eleni’s sons and father walking through the front gate of the house.

Samantha has been promised that her family, when it comes, will be on the cover of a third book.

“We didn’t want to do the typical thing people would expect in a Greek cookbook which was beautiful pictures of Greek islands. We really wanted to be about the Greek lifestyle that we knew it to be, how food is connected to family and relationships and friendships and it really brings us all together,” Eleni said.

Their parents immigrated from the Peloponnesus region of Greece, from small villages high in the mountains around Kalamata, in southern Greece.

Their parents farmed vegetables and raised sheep and goats and from their milk made yogurt, and feta and Mizithra cheeses.

They also grew grapes, made wine, and even made their own pasta. Their produce was sold at markets, and what they could afford to keep became the basis for their meals and the basis of many of the recipes in this book.

Their father immigrated to Canada in the late sixties with much of his extended family. In order to join him, their mother had to leave her entire family behind.

Having no immediate family in Canada, their mother always longed for them and for Greece. Luckily for the three sisters, this meant several trips to Greece to connect with the other half of their family; trips that shaped and influenced them immeasurably.

In Canada the three sisters, as adults, they run their own households, they cook traditional Greek meals while for them is a connection to their Greek heritage.

The sentence “Food is love” is repeated throughout both their books.

“For us that’s really what food is. Whenever we do talks or demonstrations, we try to get people to switch the way they think about food and to think about it that way. You have to eat three times a day at least or more. And if you look at it as a chore, then you dread it,” Eleni noted.

“We always grew up around the dinner table. Everything we did was always in the kitchen around food, and so that sentence ‘food is love’ really means a lot to us.” Betty added. 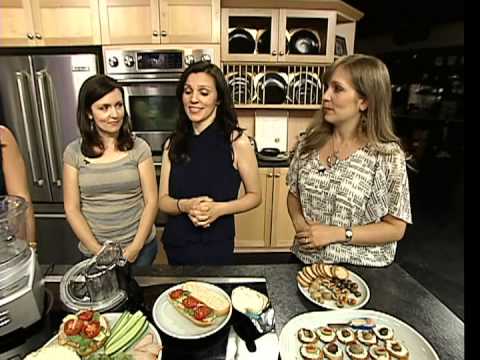