From New York to the Czech Republic, from Sao Paolo to Uganda, from Madrid to Austria and Germany. The art of Jenny Marketou has travelled all over the world and has been presented through a vast number of both solo and group exhibitions.

Her work has been displayed in major exhibitions and museums, such as the Centre for Contemporary Art (CCA) in Santa Fe, New Mexico, at the Biennale of Venice, the Biennial of Seville, the Foundation Palazzo Strozzi in Florence, the Centre Pompidou in Paris, the Eyebeam of New York, the Center of Art and New Media Technology in Karlsruhe, Germany, the New Museum in New York and others.

Marketou was born in Athens and lives in New York. She studied photography and time based art and holds a MFA from Pratt Institute in Brooklyn, New York. She has taught at The Cooper Union School of Art in New York City. She is the author of the photography book The Great longing: The Greek Immigrant of Astoria, Queens by Kedros Publishers, Athens, Greece.

She has admitted that for an artist, it is a wonderful opportunity to live and work in New York. By simply taking a train, through a few stops, she has the ability of entering to whole new worlds.

Her mixed media installations and public art projects have been sustained by research and collaboration, residencies and commissions and have been featured worldwide. She works with video installations, the internet, performance, photography and public dialog. Her work is influenced by new media and information technologies in order to explore the cultural and social relationship between art and technology. Her primary inspiration is in relationship with the multitude of readings that can be viewed in the cultural landscape in which she lives each time.

In her numerous works, “RED EYED SKY WALKERS” is included. A public participatory outdoor installation involving the combination of a flock of 99 red weather balloons and selectively disbursed wireless cameras capturing real-time video of festival passersby from multiple aerial perspectives. The result is a unique, eye-catching exhibit that allows widespread access to surveillance information through the playful, ironic, and iconic emblem of the red balloons. It was presented in Athens and in Cleveland of Ohio.

In 2011 she presented “Silver Series” with 50 Mylar balloons also with the same scientific gear and “PAPEROPHANIES” in Praxis Gallery lab of the Artium Museum with debates and public protest in the cities of Vitoria and Bilbao of the Basque Country. In 2012 “Sunspotting A Walking Forest” was presented at the Highline Park of New York in collaboration with Otto Von Busch and students from the Parsons School of Design, NYC.

Marketou represented Greece in the Biennial of Sao Paolo, Brazil and Manifesta 1 in Rotterdam. Her awards include NYSCA Grant in 2009, the CCA artists residency Santa Fe in 2009, the Ohio State Art Council Grant in 2008, the Eyebeam artist grant and residency in 2005, the New Media residency and co-production, Banff, Alberta, Canada in 2005 as well as others.

Jenny Marketou has discovered how life can be art and art can be combined with the experience of life. For her, participation is the key… 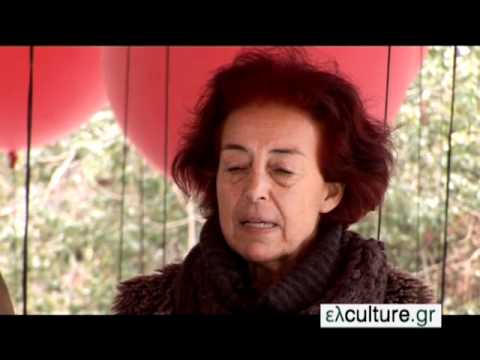