The Greek composer, conductor and professor, Konstantia Gourzi, excels for her work around the world.

She was born on 21 March 1962 in Athens, Greece. She studied music in Athens and Berlin.

In the 1990s Konstantia Gourzi founded the ‘attacca berlin’ ensemble. With them, she led the international project ‘Zeitzonen’ (‘Time Zones’) between 1991 and 1997. From 1999 to 2007 she was the artistic director of Berlin’s ‘ensemble echo’. In 2002, she instigated ‘ensemble octopus für musik der moderne’ at the Hochschule für Musik und Theater in Munich, where she is also professor.

The ensemble-network ‘opus21musicplus’ (2007), bringing contemporary music together with theatre, dance and the visual arts, is a milestone of her artistic career.

As a conductor, Konstantia Gourzi regularly works with diverse orchestras for the most important festivals in Europe and Israel. Her compositions, including theatre and film music, are performed in Europe, America, Japan and Israel.

In 2010, Gourzi released a CD: ‘Conjunctions – Synápsies’, which connects the Western string quartet with an Eastern sound world.

In 2011, Konstantia Gourzi was commissioned by the Bishopric of Munich-Freising to compose a work for the commemorative ceremony on the tenth anniversary of the attacks on the World Trade Center in New York.

In the presence of politicians and clergymen, ‘Time Zero’ received its world premiere in the Marstallplatz in Munich.

In 2012, Konstantia Gourzi was artistic director of the Samos Young Artists Festival in Greece.

She is recognised as one of contemporary music’s most important champions:
like Pierre Boulez and György Ligeti, a prizewinner of the ‘Christoph and Stephan Kaske Stiftung’.

“I feel myself, as an artist of today, compelled not only to abide by traditional and conventional pathways, but also to recognise the progression of history and bring the past into the present, with imagination, modern possibilities and my own perceptions and instinct,” Konstantia Gourzi said. 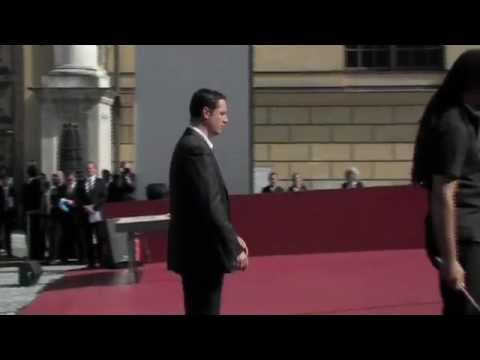